What stupid thing are people talking about now? Sigh… 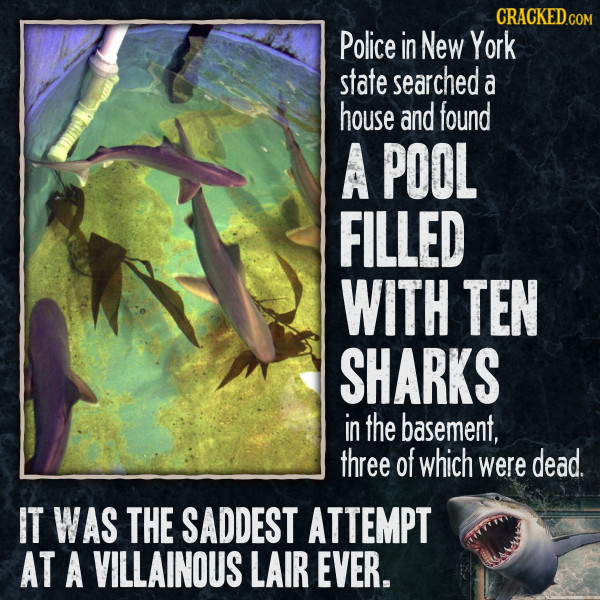 This budget James Bond villain had no business owning a pool full of sharks. Sharks, the “puppies of the sea,” typically need care that can’t be provided by a basement pool. Fortunately the living sharks were rescued and will be adopted out to loving homes- wait no sorry, to an actual aquarium capable of handling seven sharks.

This got us wondering, how exactly do you get ten sharks to your basement pool? Is there a shark delivery service? A shark black market? Guys in dark allies with trenchcoats full of sharks?

One of the difficulties obtaining sharks (other than the teethy bitey stuff) is their conservation status: many are endangered. So it surprised us to find out that you can actually shop for sharks online. This website claims to be legit, with legal permits to collect and sell sharks. It also insists upon humane treatment of the sharks, demanding their costumers show proof of proper tank facilities. The best part of the website is their guarantee: “NO GAMES! WE GUARANTEE LIVE ARRIVAL ON ALL AIR SHIPMENTS OR YOU GET ANOTHER SHARK OR YOUR MONEY BACK!” I wish there were more guarantees like this, like “If this bottle of OxyClean doesn’t obliterate spaghetti stains out of your white shirts and you aren’t 100% satisfied, receive a full refund OR YOU GET ANOTHER SHARK.” 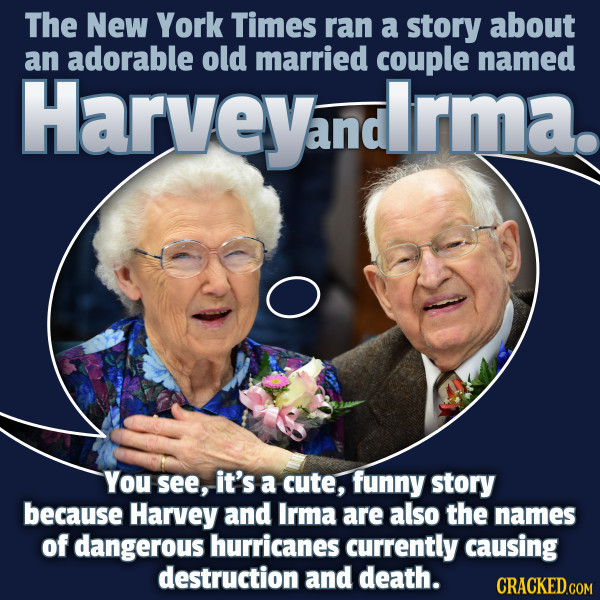 I didn’t realize there could be a worst take on hurricane Harvey and Irma, but here it is. A feel-good article published by the New York Times about an adorable old couple also named Harvey and Irma. Sure, hurricane Harvey devastated Texas, killing and displacing people. And right now Irma is making landfall, where the destruction and bodycount is rising, but look how cute this old couple is!

Do we really so desperately need hurricane stories that we have to resort to cutesy coincidences? Are we running so low on more meaningful stories, such that someone has to write this bit of morbidly cloying wordplay: “Given the ferocity of Hurricanes Harvey and Irma in 2017, this will probably be the first and last time the names appear in tandem. The Schluters, by contrast, have been appearing in tandem since the 1940s.”

Cute. Anyways, an estimated 13 living in the Caribbean have already died after catastrophic landfall from Irma. 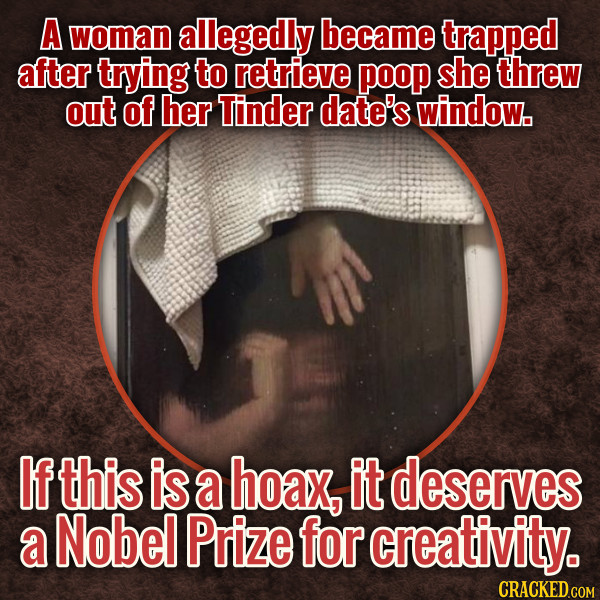 Here’s how the events reportedly went down: A woman met a guy on Tinder, went to his place, used the toilet, panicked when it clogged, dug the poop out of the toilet, threw it out the window, panicked again when she found it landed not on the lawn but in a narrow area between two inoperable windows, tried to retrieve it head first, and got stuck. Overall, a pretty above-average Tinder date.

If this is a hoax, it’s a damn good one. Not only did the fire service verify that someone did in fact get rescued from between two windows, but the sheer creative talent to weave such a compelling tale of poop retrieval would mean we have another David Lynch in our midst.

But if this story is true, I want to take a minute to address the brown elephant in the room. Guys: women poop. Girls: we have to start admitting that we poop. This whole culture of shame around women pooping needs to end. “I’m a woman, I pooped in your toilet and it clogged, I need a plunger,” shouldn’t be world-shattering, but for many women it is. We’ve been taught that the proper thing to do is to pretend we’re biological marvels who never poop and pee only once a week. We need to let women come out of the shadows, so nobody has to resort to poop espionage again. 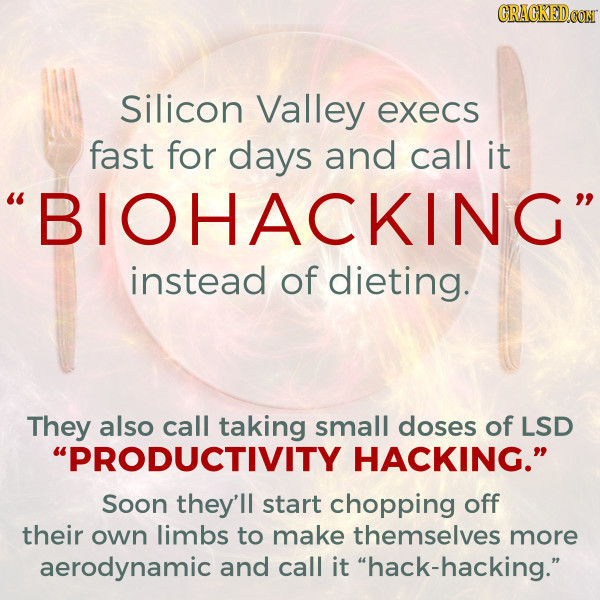 Silicon Valley executives have been so busy kissing their own asses, they’ve forgotten how to eat. After rebranding getting high on LSD as “micro-dosing,” a “productivity hack,” they’re now rebranding fasting as “biohacking.” Everything has to be “hacking” with these nerds, they probably call alone time with their lotion greased hands “intimacy hacking.”

The new trend of not eating for a few days is supposed to be a cheat code for dieting, err, I’m sorry, “biohacking.” The claim is that it helps with weight-loss (duh), productivity, and energy. Proponents of fasting sound pretty sciencey, with all their talk of ketone-consumption (which happens when the body goes into starvation mode and starts eating its own fat stores). And far be it from me to question the all-encompassing wisdom of rich Silicon Valley dweebs, but maybe it’d be cool to see what some actual scientists say about the effects of fasting.

According to articles that were published in the Canadian Medical Association Journal, it is true that intermittent fasting may offer health benefits, such as resistance to disease and increased functioning of memory and learning. However, most of these studies have been conducted on animals. Additionally, the benefits from fasting may only be due to the overall lowered caloric intake. So fasting may only confer the same amount of benefits of traditional caloric restrictions, and has the added danger of binging on non-fasting days. In fact, studies on fasting have found people often overeat to compensate for their time fasting, and fasting is also a strong risk-factor in developing binge-eating disorders and bulimia.

I’m not saying you shouldn’t listen to dieting advice from Silicon Valley executives who aren’t medical professionals. But don’t come crying to me when you try out the hottest new fad of “pee-hacking,” where you only urinate on odd-numbered days and you end up the mother of all bladder infections.