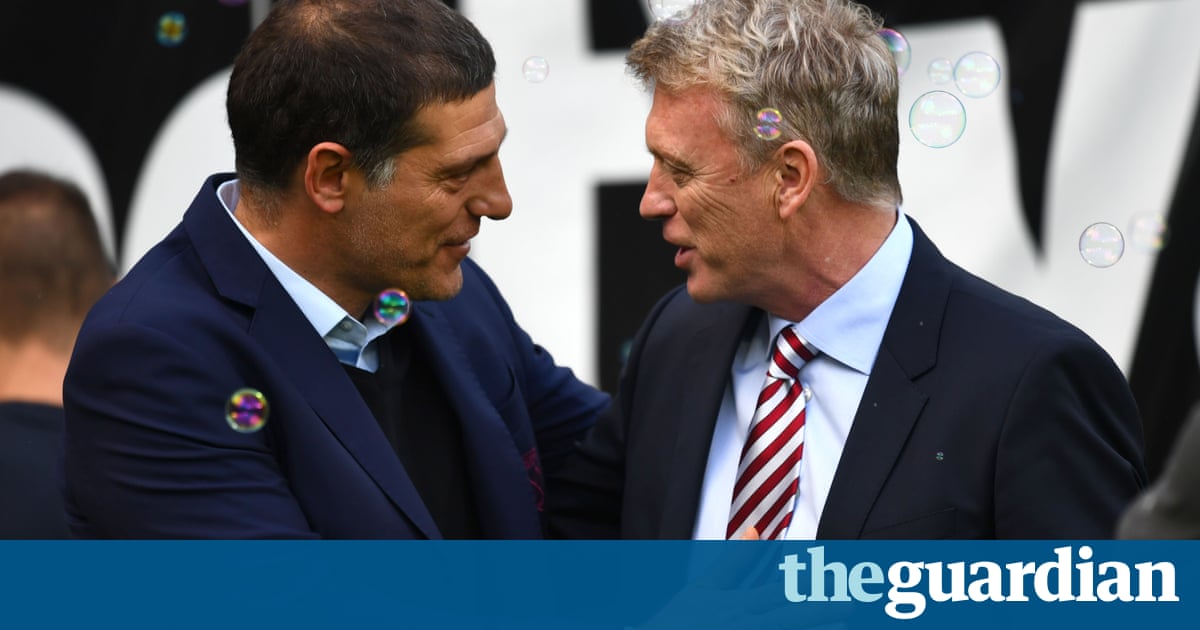 West Ham United are set to appoint David Moyes on an initial six-month contract and hand him the responsibility of hauling them away from relegation danger after finally losing faith in Slaven Bilics ability to reverse the teams decline.

The club hope the former Sunderland manager can take training as early as on Tuesday morning with Alan Irvine, Chris Woods and possibly Stuart Pearce joining him as part of his backroom staff. Moyes will be offered a fresh two-year deal if he keeps West Ham in the Premier League.

Bilic, whose contract was due to run out next summer, was sacked on Monday morning after a dismal start to the season that has left West Ham in 18th place and with two wins from their first 11 Premier League games.

While the clubs owners, David Gold and David Sullivan, had hoped that giving the manager time would eventually pay off, Saturdays wretched 4-1 defeat by Liverpool at the London Stadium was the final straw. The Croats assistants, Nikola Jurcevic, Edin Terzic, Julian Dicks and Miljenko Rak, have also left the club.

Gold and Sullivan released a statement explaining that they felt compelled to act in the clubs best interests after seeing few indications that Bilic was capable of reviving West Ham and added that they plan to appoint a quality manager to the position to inject fresh ideas, organisation and enthusiasm into a very talented squad.

That manager is Moyes, even though news of the 54-year-olds arrival on an interim basis has been met with opposition from supporters. The Scot has struggled since leaving Everton for Manchester United in 2013 his last three jobs have ended in failure and has been out of work since quitting Sunderland after their relegation from the Premier League last season.

Yet West Ham were desperate to move quickly after sacking Bilic and, with a lack of alternatives, Moyess immediate availability has counted strongly in his favour. They were not prepared to countenance a long wait to prise Sean Dyche away from Burnley. Instead they will reassess the situation at the end of the season.

Bilic said he was sad at the way the season had unfolded. I believe in my qualities and wanted desperately to fight on to turn things around, he added, but I understand the clubs desire [for] change.

Moyes will have time over the international break to prepare for his first game, away to Watford on 19 November, and he will be given a chance to earn a lengthier stay at West Ham by leading them to safety. The former Everton, Manchester United and Real Sociedad manager must prove that he is still capable of succeeding in the top flight of English football after finishing bottom with Sunderland last season.

West Ham believe that Moyes was placed in an impossible position at Sunderland, who are bottom of the Championship after sacking Simon Grayson last week. They regard him as a safe pair of hands and trust he has not lost the abilities that allowed him to enjoy 11 productive years at Everton before he jumped at the chance to replace Sir Alex Ferguson at United. He will link up with Tony Henry, West Hams chief scout, with whom he worked at Everton.

Moyes will find a side crying out for greater organisation. West Ham have the worst defensive record in the division, having conceded 23 goals, and the evidence had mounted against Bilic long before the Liverpool game.

The wheels were already in motion after West Ham threw away a 2-0 lead against Crystal Palace on 28 October, conceding a 97th-minute equaliser to the Premier Leagues bottom side, and the hierarchy made contact with Moyes before the visit from Liverpool. Bilic was a popular figure at West Ham, who appointed him as Sam Allardyces replacement in the summer of 2015, and the 49-year-old enjoyed an impressive debut season, leading them to seventh place in their final year at Upton Park.

West Ham toiled after moving to the London Stadium last season and although they finished 11th, they were dogged by relegation fears for most of a troubled campaign. West Ham sounded out Huddersfield Towns David Wagner in March and also looked at Marco Silva, who would leave Hull City for Watford in the summer, but they eventually decided to press on with Bilic despite concerns over his tactical acumen and training methods.

West Ham believed Bilic had enough talent at his disposal after a summer in which they spent 40m on Marko Arnautovic and Javier Hernndez, signed Pablo Zabaleta on a free and brought in Joe Hart on loan. Yet Bilics relationship with the board became increasingly strained, especially after the failure to sign William Carvalho from Sporting Lisbon at the end of the transfer window.

Before last months shambolic home defeat to Brighton & Hove Albion, Sullivan said that a belief in morality had kept him from firing Bilic. But West Ham, who had hoped that moving to the London Stadium would allow them to challenge the elite, are desperate to avoid dropping into the Championship.

Sullivan and Gold were alarmed by statistics showing that West Ham have covered the least distance and made the fewest sprints in the Premier League this season, which heightened the scrutiny on Bilics training methods and Rak, the fitness coach. The players did not feel that they were fit enough and Bilic admitted that his team did not run enough.

Players continued to suffer muscle injuries even after West Ham moved to their new training ground in Rush Green and the team came to lose faith in Bilics tactics. There was disquiet within the dressing room over a focus on passionate speeches instead of tactical instructions before games.

The feeling, ultimately, was that Bilic was too soft with his players. There was astonishment in the boardroom that he responded to the humiliation against Liverpool by giving the squad a day off on Monday. Bilics fate was ultimately sealed by the time he spoke to Sullivan and Gold on Monday.