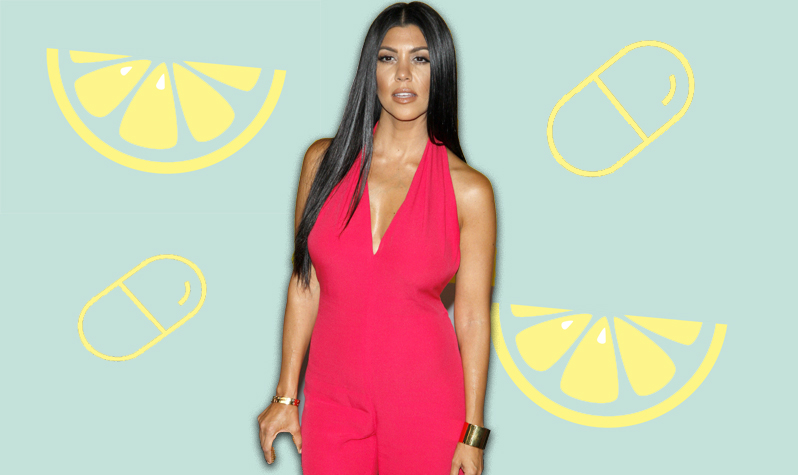 If you’re anything like me, you spend most of your time on the internet browsing the ASOS sale section and reading about shit like what Bella Hadid does in the morning. People love finding out what healthy habits successful people swear by, and for those of us who aren’t exactly “morning people,” it’s hard to relate. Like, waking up at 6am for hot yoga sounds like a terrible dare, not something I’d willingly set an alarm for. Regardless, I decided to try five morning routine trends healthy celebs love. People who swear by these habits include Jennifer Aniston, Jessica Alba, Kourtney Kardashian, Julianne Hough, and Gwyneth Paltrow—the literal beacon of health. If these women can preach about their amazing morning routine hacks, I thought I’d give them a try. Here’s how they all went down.

Until recently I thought apple cider vinegar was just an ingredient for baking cookies or something. But then again, I don’t bake or know anything about baking-related ingredients, so maybe that was just me. Anyway, it turns out people drink a shot of apple cider vinegar in the morning, and it’s supposed to help with killing bad bacteria in our bodies and make us less hungry throughout the day. Some people mix it with water and some people take it straight, but after trying both ways I can guarantee it’s just as gross in either capacity. I took a swig of the APV (that’s what the celebs call it) before my breakfast in the morning, and I honestly didn’t notice much of a difference throughout the day. Like, maybe I was less of a ravenous animal at around 3pm when the caffeine/ sugar crash usually kicks in, but that could be just a placebo effect. Either way, I don’t think this is doing much for everyone.

2. The Glass Of Lemon Water

The glass of room-temperature lemon water is nothing new or trendy, but every successful woman in the world does this, so I thought I’d finally get on board. Considering I usually wake up and consume a dangerous amount of coffee before 9am, it was kinda nice to drink my lemon water first and pace myself. I drank 16 ounces of lukewarm water with lemon slices before I had my coffee, and I really think this made a difference in my day. People say the water and lemon combo is supposed to kickstart your digestion and keep you hydrated throughout the day, and I can confirm that I felt a lot better on the days I had my lemon water. I felt like my digestion was on track and I was super hydrated, and I got less tired once the coffee started wearing off. Once again, this could be a placebo effect, but I totally felt like a wellness blogger in the moment so that alone was worth it. Ugh, love my healthy lifestyle.

The only thing worse than the girl who describes herself as an “early bird” is the one who voluntarily sets an alarm to start sweating before the sun is up. The early morning workout is a painful and tragic morning routine, but literally every single successful person does it, so I couldn’t pass on this one. Like, even Mark Cuban gets up early to work out six days a week. I literally thought his job was just sitting on a leather chair while listening to people trying to get his investment. Anyway, getting up early to work out is difficult and requires a lot of strategy. You have to lay out your clothes the night before, brush your teeth in 10 seconds, and basically pretend the snooze button doesn’t exist. Honestly, it feels good to know you got your workout over with before work, but it’s so painful to get there so IDK how many days a week most people can realistically do this without going insane.

A lot of celebrities have been preaching about taking a probiotic every morning, so I had to look into this magical pill and see what’s so special about it. I’ve never really been into diet pills or sketchy vitamins, but apparently probiotics are the real deal and our bodies actually need them. After doing some research, I found out that our bodies are filled with microbiome, and by taking probiotics, which are essentially “good bacteria” for our gut, we can balance our microbiome while improving our digestion and balancing our blood sugar. The probiotic definitely takes a few days to kick in, but once it does, you’ll definitely notice a difference. By taking one pill in the morning before you eat, you’ll feel less bloated and gross during the day, and you’ll probably feel like your stomach is flatter, too. I’m not a doctor or a scientist, but like, it can’t hurt—right?

Ever since morning meditation became the new Diet Coke with two Adderalls, everybody claims they love their moments of mindfulness in the morning. Like, these people literally take the limited time they have in the morning to sit in silence, or even worse, set their “intentions” for the day. While it was hard for me to take this habit seriously, I thought I’d give it a try. I downloaded a popular meditation app and followed a morning meditation that lasted like, 10 minutes, and it didn’t do much for me. It was hard to sit still and focus on my breath, but then again, I may have gotten more out of it if I went in with a better attitude. I mean, maybe I’m just not the “mindful” type of person like all these LA-based celebrities with two hours to kill in the morning. I live in New York City and have to be on an overcrowded train before Jennifer Lawrence even opens her eyes in the morning, so excuse me if I don’t feel like meditating at the crack of dawn. Can I live?