Matthew Petersen, whom Trump nominated for the circuit court of the District of Columbia, struggled with a line of questioning on some key legal principles 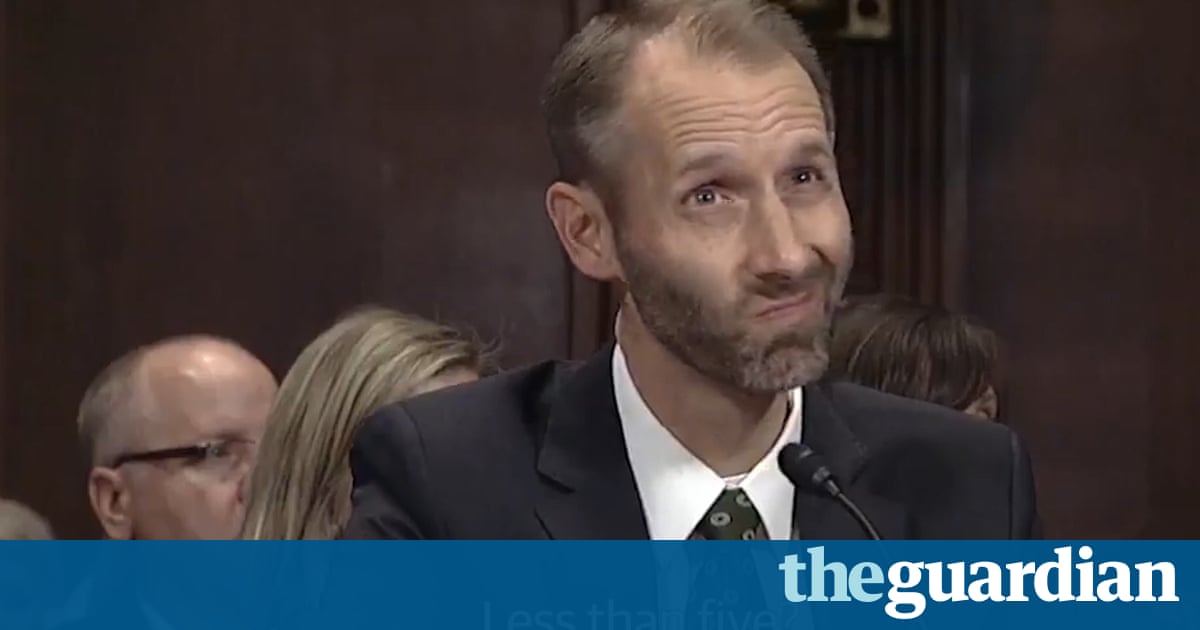 It will go down one as of the most excruciating job interviews of all time.

A Trump federal judicial nominee was utterly stymied by a line of questioning on basic knowledge of procedural law during his Senate confirmation hearing Thursday, raising questions about the fitness of Trumps choices for the posts.

The video of the polite, yet devastating encounter, comes just as Trump managed to set a new record for the number of judicial nominees confirmed in a presidents first year. Trump had a huge structural advantage when he came into office to outpace previous regimes and his administration has quietly made the reshaping of the federal judiciary a top priority.

In the video, the man in the proverbial hot seat was Matthew Petersen, currently serving as a commissioner with the Federal Election Commission. Trump nominated him for the prestigious and pivotal federal circuit court of the District of Columbia in September.

Senator John Kennedy, a Republican, began his line of questioning to the five candidates present for the hearing by asking if any had not tried a case to verdict, to which Petersen raised his hand. Kennedy, a trained lawyer, zeroed in for a rapid fire line of questioning on some key legal principles that turn up in federal court cases:

Do you know what a motion in limine is? Kennedy asked.

I would probably not be able to give you a good definition, Petersen responded.

Do you know what the Younger abstention doctrine is? Kennedy continued.

Ive heard of it, but again, Petersen responded, trailing off.

To non-lawyers, the exchange might have sounded like a succession of gotcha questions, esoteric queries intended to make the candidate appear unqualified. But the principles in question are in fact, foundational, essential knowledge for the job that Petersen is trying to be confirmed to perform.

A motion in limine, for example, is a request by counsel, outside the presence of a jury, to exclude evidence which a party feels is too prejudicial to even be mentioned in open court. They are a routine, nearly ubiquitous feature in almost any trial setting.

Recognizing that things were not going particularly well for himself, Petersen tried to explain his inability to answer with the fact that hes taken a different path than the one many successful district court judges have taken.

I understand the challenge that would be ahead of me if I were fortunate enough to be named a district court judge, he said to an unimpressed looking Senator Kennedy.

Despite his apparent shellacking of Petersen, Kennedys office declined to answer on whether or not he would ultimately vote for Petersens confirmation. In the past year, I have supported nearly every one of President Trumps picks, but I dont blindly support them, Kennedy told the Guardian in a statement. I ask questions that I expect them to be able to answer. In doing so, Im just doing my job.

Even as Kennedy seemingly tries to highlight his loyalty to the president, the fact remains that he was the first Republican to break with the administration and vote against one of Trumps nominees, Gregory Katsas, in November. The same week, Kennedy spoke forcefully about two picks he found particularly unqualified.

It is embarrassing, Kennedy told reporters about one of Trumps nominees, and I think the president of the United States is getting some very, very bad advice.

The senator also said he had raised concerns about Trumps nominees to the White House, but added: Its like talking to the wind.

Other GOP senators appear to be breaking with the president on judicial nominees too, albeit in less confrontational ways. Judiciary committee chairman Chuck Grassley advised the president to reconsider two nominees Brett Talley and Jeff Mateer earlier this week, and the White House ultimately decided to not move forward with them on Wednesday.

Talley became a widely panned pick, after it emerged that he was less than three years out of law school, had never tried a case, was married to a White House staffer creating a possible conflict of interest that he did not disclose, and because of some controversial blog posts he had penned.

Mateer, meanwhile, had been under scrutiny for blatant anti-LGBT views.
In a series of speeches made in 2015, Mateer compared homosexuality to bestiality, advocated for gay conversion therapy and described transgender children as a part of Satans plan.