President Donald Trump delivered an angry and forceful defense of his response to the violence in Charlottesville, Virginia, declaring at a campaign-style rally of supporters in Phoenix that the news media had distorted his position.

Addressing thousands of supporters Tuesday evening at the Phoenix Convention Center, Trump accused major media organizations of being “dishonest” and of failing “to report that I spoke out forcefully against hatred, bigotry.”

Trump spent more than 20 minutes of a 75-minute speech delivering a selective account of his handling of the violence in Charlottesville, where he overlooked his initial statement blaming “many sides,” as well his subsequent remarks that there were good people marching alongside the white supremacists. 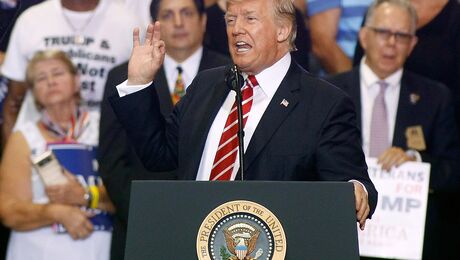 As the rest of the Republican Party was eager to move on from Charlottesville, where one counter-demonstrator was killed and 19 people were wounded, Trump seemed like he couldn’t wait to go back and rehash one of the worst weeks of his presidency — even carrying his much maligned initial statement to the podium. The controversy sparked intense objections from Democratic and Republican lawmakers, and prompted an exodus of corporate executives from White House business advisory panels.

“It’s time to challenge the media,” Trump said, for their role “in fomenting divisions.” The president added, “The only people giving a platform to these hate groups is the media itself and the fake news.”

Before the speech was over, Trump had mocked the state’s two Republican senators, threatened to shut down the government if he doesn’t get his way on border wall funding and suggested he might pull out of the North American Free Trade Agreement.

Futures on the S&P 500 Index reversed gains to slip as much as 0.3 percent as Trump spoke. The yen strengthened, while the Mexican peso weakened 0.2 percent.

“His comments on the Nafta negotiations once again brings the general direction toward obstructing free trade, and raises concerns over its impact on global trade,” said Hideyuki Ishiguro, a senior strategist at Daiwa Securities Co. in Tokyo.

After the rally, former U.S. Director of National Intelligence James Clapper went on CNN and said that “the real Trump came through” in the speech. Clapper, who served under President Barack Obama and has emerged as a Trump critic, questioned his fitness for office and expressed concern that he has access to the nuclear codes. Clapper said it would be up to Republican lawmakers to step forward.

Trump “should have quit while he was ahead after last night,” when he outlined his Afghanistan strategy, Clapper said.

Tennessee Senator Bob Corker last week voiced one of the strongest Republican rebukes of the president, saying "radical changes" needs to take place at the White House. Trump "needs to take stock of the role that he plays in our nation and move beyond himself — move way beyond himself — and move to a place where daily he’s waking up thinking about what is best for the nation,” Corker said.

Trump also walked up to the line of offering a pardon to former Maricopa County Sheriff Joe Arpaio, saying the lawman had been punished for “doing his job,” yet left open the possibility one would likely come.

Arpaio, 85, the county sheriff for more that two decades until being voted out of office in November, was convicted July 31 on one count of federal misdemeanor criminal contempt for defying a 2011 court order to stop traffic patrols that targeted immigrants. He faces a maximum of six months at his sentencing hearing, scheduled for Oct. 5.

Responding to chants from the crowd calling for a pardon of Arpaio, Trump demurred, saying, “I won’t do it tonight because I don’t want to cause any controversy.”

The visit to Arizona gave Trump a chance to renew calls for Congress to fund a wall or fence along the U.S.-Mexico border. The border fence near Yuma has reduced illegal entry significantly over the past decade, according to administration officials.

Trump made bolstering border security and pursuit of undocumented immigrants already in the U.S. a centerpiece of his campaign for president. But after promising to build an impenetrable barrier along the 1,989-mile border, Trump has scaled back his plans. Mexico has rejected Trump’s vow to make that country pay for it and Congress has so far balked at providing much money for the project.

On Tuesday, he suggested he’d be willing to allow the federal government to shut down when the budget is considered next month if funding for his wall isn’t included.

"If we have to close down our government, we’re building that wall," he said to cheers from the crowd.

While Trump won Arizona in November, he’s been openly feuding with the state’s two Republican senators, John McCain and Jeff Flake, both of whom are frequent Trump critics. Trump lashed into both of the senators while saying his aides implored him not to mention their names.

Complaining about the failure of the Republican Obamacare replacement plan, Trump referenced McCain, who voted against it. “One vote away, I will not mention any names. Very presidential.’’

Regarding Flake, Trump said, “Nobody wants me to talk about your other senator.’’ He went on to call him weak on crime and the border.

Trump last week called Flake, who’s up for re-election in 2018, “a non-factor in the Senate” and “toxic” in a tweet that also welcomed a primary challenge to him from former State Senator Kelli Ward. That prompted several senior Republican senators, including Majority Leader Mitch McConnell of Kentucky, to come out with statements of support for Flake.

Neither Flake nor McCain attended the Tuesday rally.

Before arriving in Phoenix, Trump toured a U.S. Customs and Border Protection facility in Yuma, a few miles from the state’s border with Mexico.