As one glance at Reddits homepage will tell you, its not a site that’sconcerned with being cute.But as more than 230 million redditors will tell you, a forum doesnt have to have a beautifully designed interface for it to be filled with some of the best original content on the internet. Its all about the users.

Still, in the midst of all the ugly chaos that is the front page of the internet, some users have found a way to rise above. Although you can easily find IRL celebrities featured on the popular subreddit r/IAmA, some of the sites most popular users are only famous online, and for good reason. Here’s our running list of some of the most famous (and infamous) celebrities of Reddit.

Shitty_Watercolour is arguably Reddits most influential and well-known illustrator, otherwise known by his real name, Hector Janse van Rensburg. Van Rensburg started posting his amateur watercolor paintings on Reddit in 2012. Contrary to what his username suggests, van Rensburgs work garnered a lot of attention that also led to his huge following on Twitter and Tumblr. In 2017, the 23-year-old announced on Reddit that he graduated from the University of York with a degree in philosophy, politics, and economics.

Though he announced earlier this year that his time on Reddit was coming to a close, u/awildsketchappeared will forever live on as a legend. After five years worth of novelty character sketches and regular drawing advice, wild sketch announced his decision to leave in 2017. As one of Reddits mainstays and beloved commentators, u/awildsketchappeared was the moderator of several subreddits for users to discuss or submit drawing requests. Even when he skipped a day of posting, hed surprise users in comments and show up in multiple top default posts, usually with a goofy sketch or GIF.

As it turns out, Arnold Schwarzenegger is just as much of an avid fitness and weight lifting enthusiast on Reddit as he is in real life. The former California governor frequents pages like r/bodybuilding with live streams of his training sessions and r/fitness with his own tips and tricks, along with the occasional tidbit about his time in office. In several instances, Schwarzenegger has been known to contact his biggest fans directly. Last year, his response to a subredditpost about a terminally ill fan went viral after he offered to contact the fan personally.

Wed be remiss not to mention the infamy of Reddit user StanGibson18, better known by his legal name as Kenneth Bone. In case you missed a huge chunk of the internet in late 2016, theres a lot to unpack with Bone, particularly in regards to his misguided Reddit comments. Just after he became a national meme after appearing on a presidential town hall debate, Bone took to r/roastme where he asked the people of Reddit to roast him. Come on, show me what you got, he wrote on a piece of notebook paper accompanying the post. Users willingly obliged.

For Robert Allam, otherwise known to his followers as u/gallowboob, Reddit is a place for daily aww pics of dogs and occasional wholesome memes. Though he was noted by some users in one legends of Reddit forum as a voluminous s***poster, its important to give credit where credit is due. He does post a lot more than most, making his daily pics float to the top of pages like r/pics, regardless of their subject matter. Hes also pretty transparent. A quick visit to his page gives you his full name, Instagram, and Twitter handle. In a world of dark forums and anonymity, total transparency is a rare find.

Anonymous user SlowlyTurnsGay is exactly what it sounds like, and its what makes this user one of the most underrated commentators across a variety of subreddits. Dont let low post karma fool youthis users specialty is in comments in which he replies to a subreddit question with a story that slowly turns gay. Typically, theyll involve the gradual realization that hes in love with his friend Brad. While turning gay definitely isnt a thing, these comments are still delightfully nuanced (though some may be NSFW).

Aside from posting a ton of content almost daily and racking up insane amounts of karma, Max Patrick Schlienger (or u/RamsesThePigeon) is an advocate for Reddit as a necessary and informative platform. For the rest of the Internet, Reddit is a much-needed filter, Schlienger told the Washington Post in 2015. Top-scoring submissions make their way out into the greater Internet, finding new life on news web sites, Facebook walls, clickbait sites, Twitter feeds the list goes on. Schlienger also moderates a ton of popular subreddits, such as r/pics, r/funny, and r/ShowerThoughts.

For poet Sam Garland, otherwise known as Reddit poet celeb u/Poem_for_your_sprog, the questions posed in AskReddit are a blank slate for short, geeky rhyming responses and dark Shakespearean verses that redditors worldwide have come to love. Previously operating anonymously, Garland revealed his identity to the Reddit community in 2015, along with the release of his first original collection, The Mouse in the Manor House (and other poems).

Youprobably know iBleeedorange, even if you’re new to Reddit. This userhasracked up unbelievablelevels of comment and post karmaand frequents some of the most popular subson a daily basis. On top of that, he’s listed as a moderator for more than 20 subreddits, including his own hate page. On his Twitter account, iBleeedorange is identified only as Kevin, the self-proclaimed “karmawhore of Reddit.” While this is a well-deserved title (and certainly something he’s dedicated a lot of time to), there are still subreddits dedicated to hating some of the most popular users. All too often, with Reddit fame comes a dose of Reddit shame.

Freddie Wong is an internet video star and also a borderline Hollywood celebrity. His first-rate YouTube videos have brought him attention from major Hollywood personalities. While he usually prefers to simply promote his videos on Reddit, he also jumps into the fray once in a while, often with a fun Hollywood or filmmaking anecdote. Kevin Morris 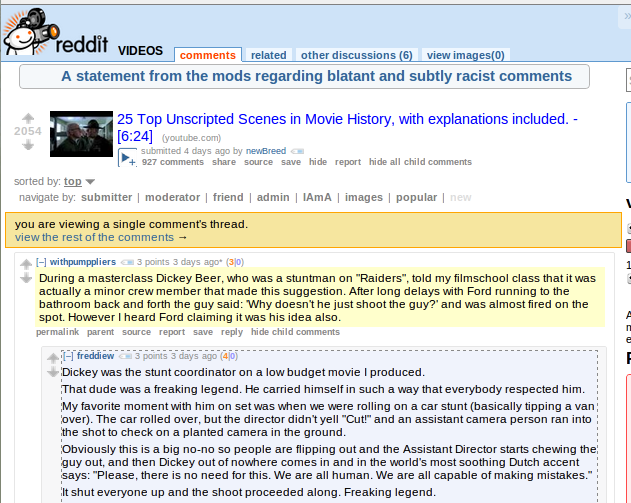 Harmons NBC comedy Community owed a lot of its existence to the internet. Indeed, r/community became one of the most influential voices in the push to bring the show back, and his current project, Rick and Morty, has proven just as popular on the social news site.K.M. 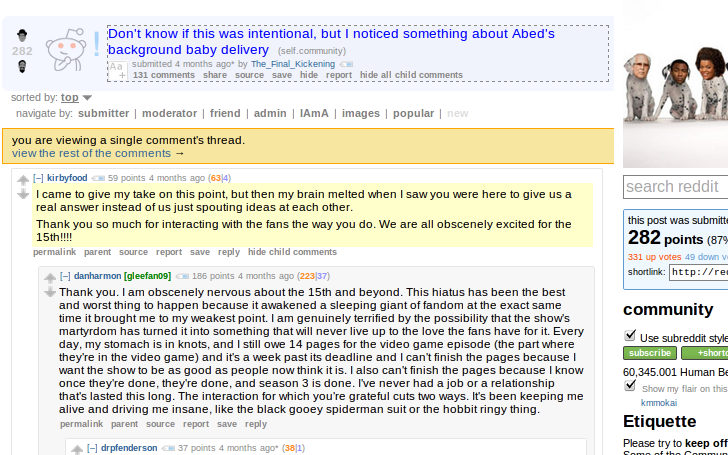 OK, we admit its a stretch to call Sanderson a celebrity. But in the niche of fantasy fiction, hes a big deal: Hand-picked to complete the epic Wheel of Time series after Robert Jordans death and author of the wildly popular Mistborn series, Sanderson is a rising star.Hes not afraid to plunge head first into Reddit. Here he is replying far too politely to an obvious troll. K.M. 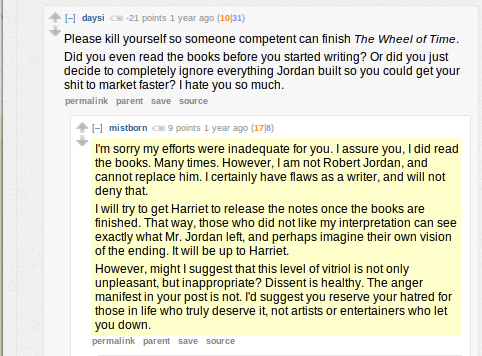 Editor’s note: This article is regularly updated for relevance.