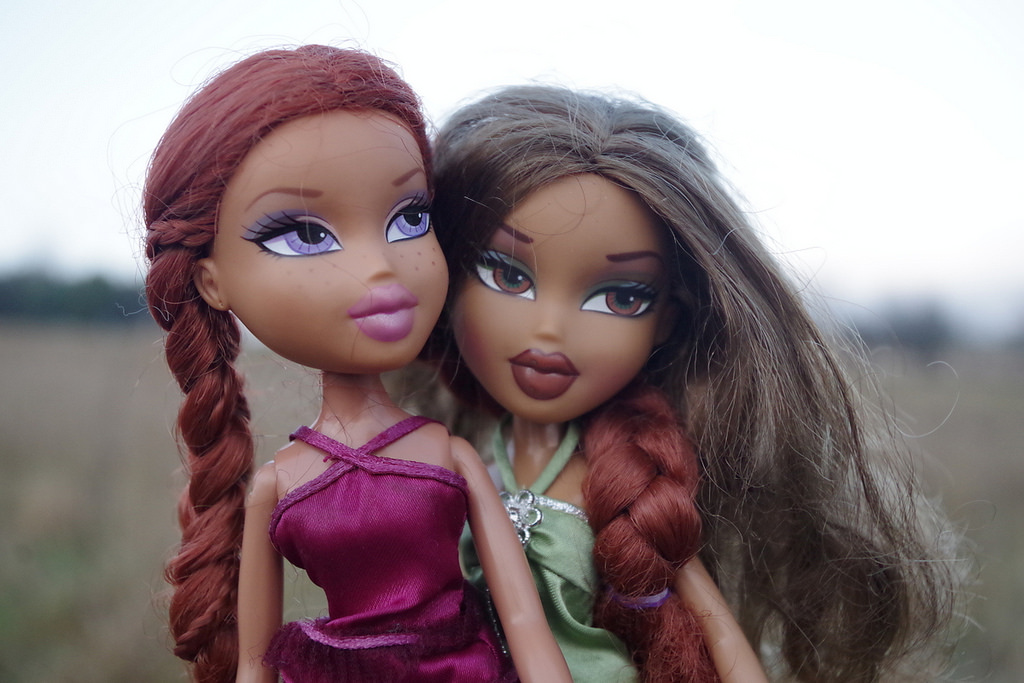 If there’s one thing we all know about so-called viral makeup trends, it’s that 90% of them are bullshit. Squiggly eyebrows? Show me one person who is actually doing that in public. Just ONE! The people demand receipts! That being said, the latest viral makeup trend that may have slightly more credibility involves doing your makeup to mirror a Bratz Doll, aka what Kylie Jenner does every damn day of her life. We all remember Bratz, the heavily made-up dolls with lip fillers no feet and the most extra looks imaginable. These dolls took the Betches “dress like a slut” philosophy and monetized it for children. The early 2000s really were something, eh? Basically, the Bratz were thots before Instagram launched thotism as we know it today. In hindsight, we can now see clearly that each Bratz doll corresponds to a very real and very special variety of thot who fills our feeds with her selfies daily. Here’s how each of them break down: 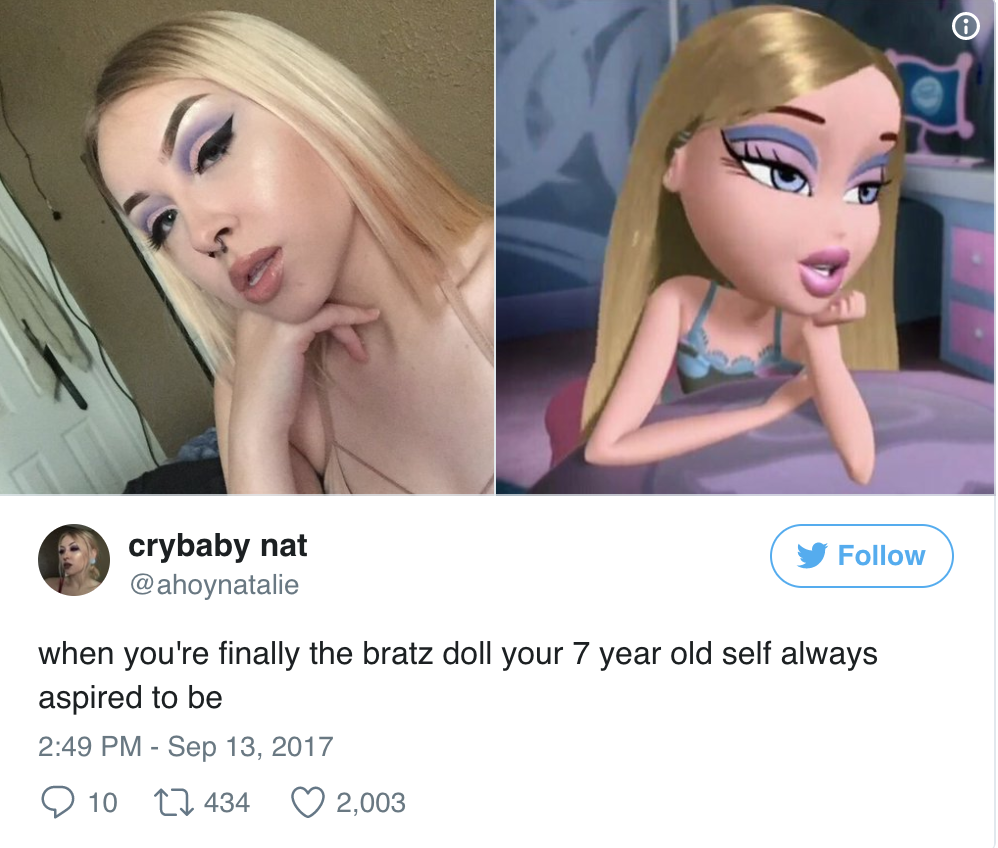 Truly a special breed, Chloe—nicknamed “Angel” because she doesn’t get how nicknames work (see: Sami Sweetheart)—wants desperately to be a background vocalist on a local rapper’s mixtape, but is quite simply too white to function. She makes vague references in her Insta photos about being “hard” and her “struggles,” but you remember her from second grade and are pretty sure she grew up in the rich person suburb next to yours. Chloe’s biggest accomplishment are her contributions to thirst-trappery, where she is truly unmatched. Your feed is constantly filled with photos of herself that you are legally required to screenshot and send to your group chat with the text, “You can see her vagina in this, right?!?!” Occasionally, Chloe’s Instagram will go dark because too many people reported her account as porn, but she always comes back with a long screenshotted note directed at “haters” full of strange grammatical choices and vague references to how you “just gotta do you.”

Insta Bio: “All U Bitches Mad” – My new SiNgLe oUt NoW On SoUndCloud! Link In Bio<3 xoxoANGEL 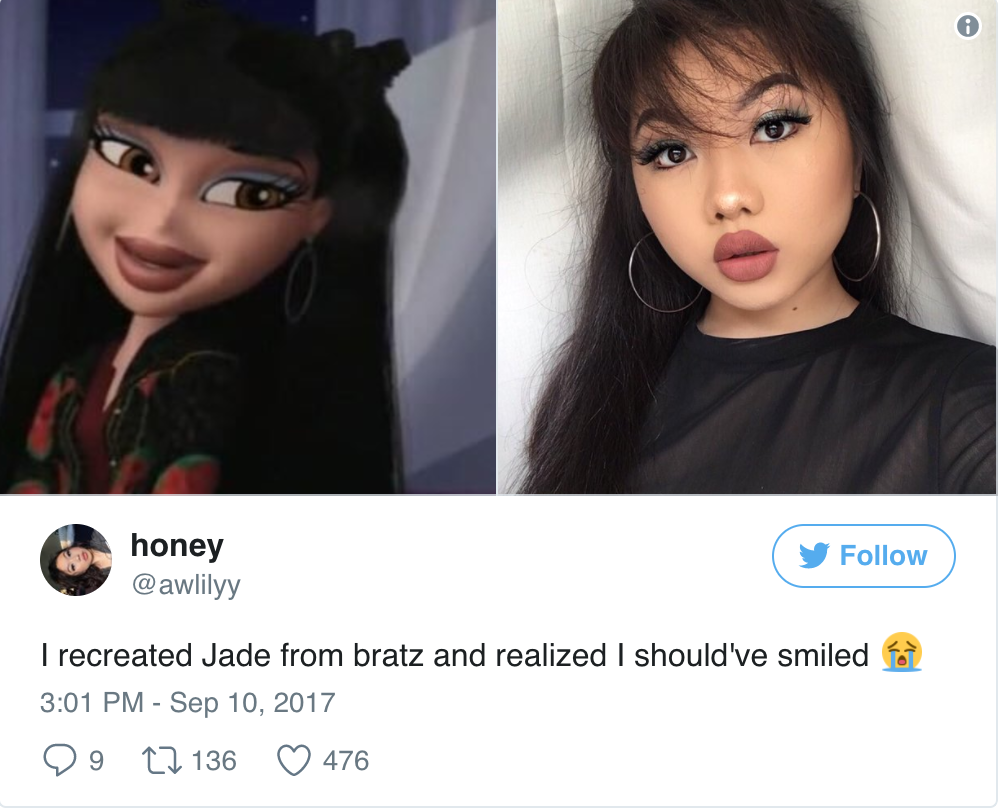 Jade, whose nickname is Kool Kat (again, not how nicknames work), wants you to know that she is the ho the phrase “hos in different area codes” is referring to. You keep following Jade mainly because you’re trying to figure out how a person who does not appear to have a job is constantly traveling to different countries. Your entire group chat has basically concluded she’s a high-end escort of some kind, but the rules of feminism state that you must continue to support her by liking her photos in hopes that one day she’ll invite you along on one of her journeys. You know she has at least one boyfriend who is a sultan because of the time she stayed in that spinning hotel in Dubai, and she appears to be on a mission to Instagram herself standing next to every luxury hotel pool on the planet. 20 years from now you’ll check back in on her and find out she’s in jail for smuggling cocaine in her butt and everything will make sense.

Insta Bio: They say a smile is the same in every language, well so is Resting Bitch Face<3 Jetsetter <3 Student of Fashion <3 HMU On WhatsApp

Example: Tila Tequila (Before she became an alt-right Nazi) 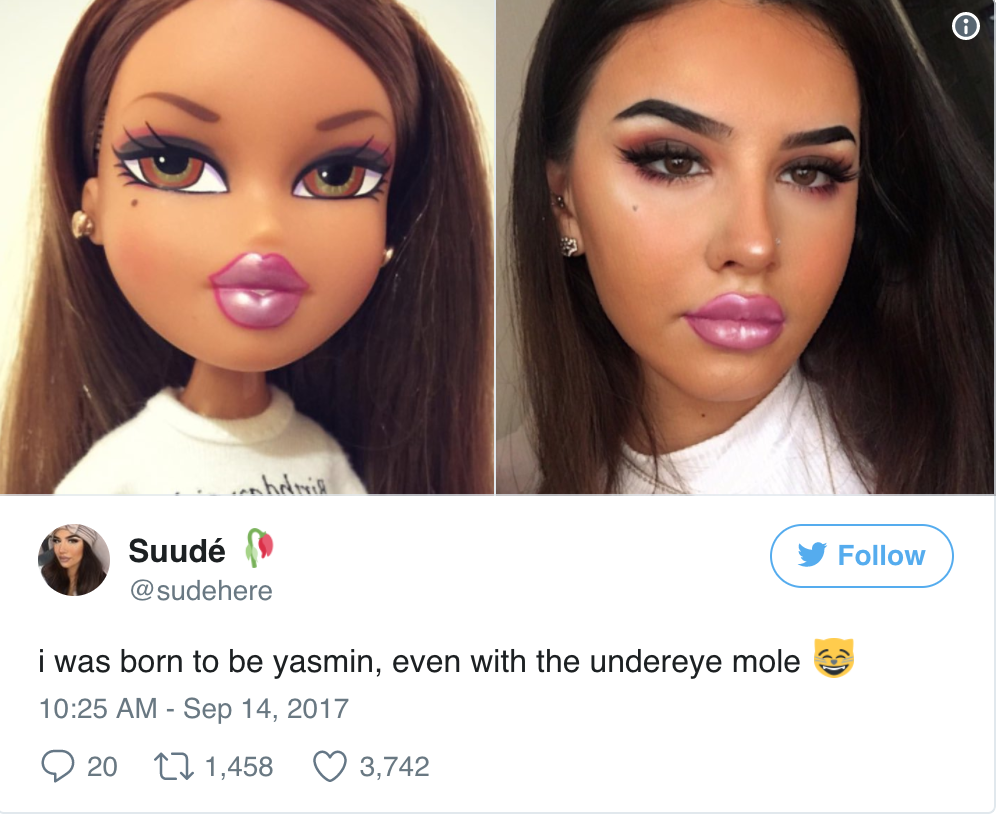 Yasmin, nicknamed Pretty Princess (can someone put me in touch with a Bratz representative? we need to talk about nicknames…), doesn’t need the thot life for money or food or weight loss tea endorsements. Yasmin is a thot purely for the love of the game, and honestly, you kind of respect it. You started following Yasmin because you were fascinated by her ability to seemingly have erect nipples at all times, but you stayed after she requested you on LinkedIn and you realized she was a low-key successful businesswoman. Sheryl Sandberg by day, Ariel Winter by night, Yasmin’s account is private for a . Does she have her own line of lipsticks that makeup vloggers are raving about? Yes. Is that going to stop her from posting pics of herself in bed with captions like “Come find me ;)?” Hell the fuck no. Is Yasmin a feminist icon, or does her very existence set women back thousands of years? Unclear, but you’re not going to unfollow until you find out. 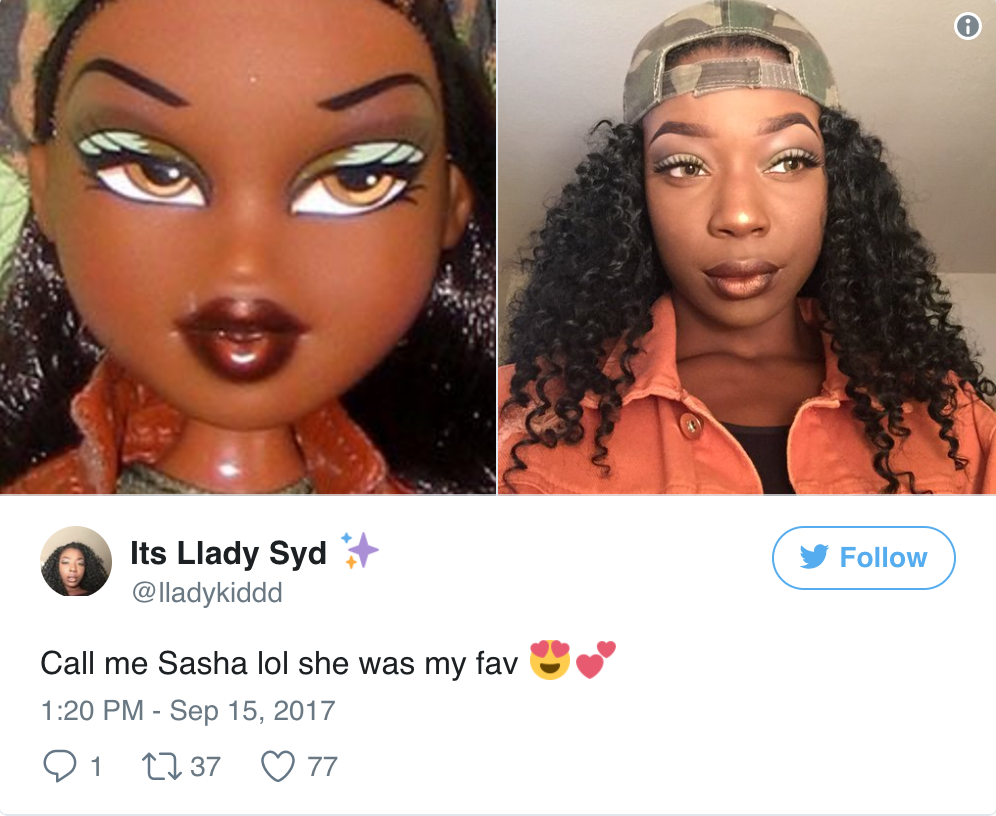 You don’t know Sasha IRL, but you are legitimately concerned for her safety. Every other week, Sasha appears to be embroiled in some kind of major crisis, and she has no qualms about sharing every detail of those crises on social media. Bless her heart. There was the time she was moonlighting at a Florida strip club and a loose dog bit her on the leg (“Please donate to my GoFundMe surgery page y’all! My foot is fucked!”). There was the time her ex boyfriend Snoop Dogg (different Snoop Dogg) crushed her apartment with a helicopter (“Venmo me @Sasha2Fierce2Furious y’all! My roof is fucked!). And, of course, there was the time she didn’t post for a few weeks and you were sure she was dead but then her Insta story revealed she just trapped on a boat (Tweet my whereabouts using #FindSasha! Where tf am I?!?! Our navigation tools are fucked!”). Sasha’s life is a beautiful human train wreck, and you have no choice but to follow obsessively and hope you can make it to her funeral. It’ll probably be lit.

BTW, her nickname is apparently “Bunny Boo” and I’m calling the police.

Insta Bio: Bitches Ain’t Shitttttt – GoFundMe.com/SashaSonFund to help me find my son!!! where tf is he!?!? 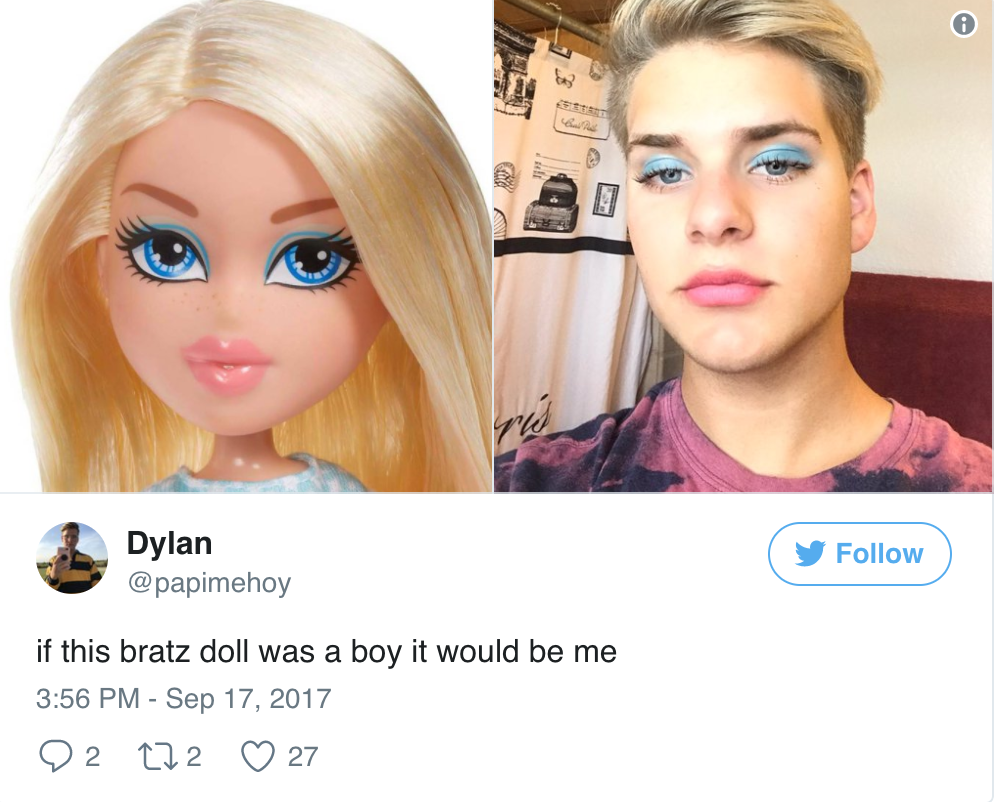 Raya, aka Sun Rayz (kill me), was the fifth Bratz doll added to the pack, mainly because she was a full-fledged Christian before that point. Raya was raised in the light of the Lord, but after a fashion-internship-turned-stint-on- took her to New York, Raya has converted to the Church Of Thotism and she is never looking back. But don’t worry, Raya has not fully turned her back on Jesus. Each of her selfies, cleavage pics, and thirst traps are accompanied by a caption like, “God is great!” or “Living in HIS light<3” and she is not above just straight-up posting a Bible verse from time to time. How she reconciles her thot lifestyle with her love of Christ, you’re not sure, but photos of herself at Sunday service in a bodysuit tell you she’s doing just fine. One day she’ll scrub her entire Insta presence and return with an entirely new persona after marrying a secretly gay pastor and popping out a baby named Zion or Abraham or some shit. She’ll act like everyone has forgotten her former thot life, but you have the screenshots to prove it.

Insta Bio: The Lord Has Plans For This One Right Here <3, Christian, Future Mommy, 32D