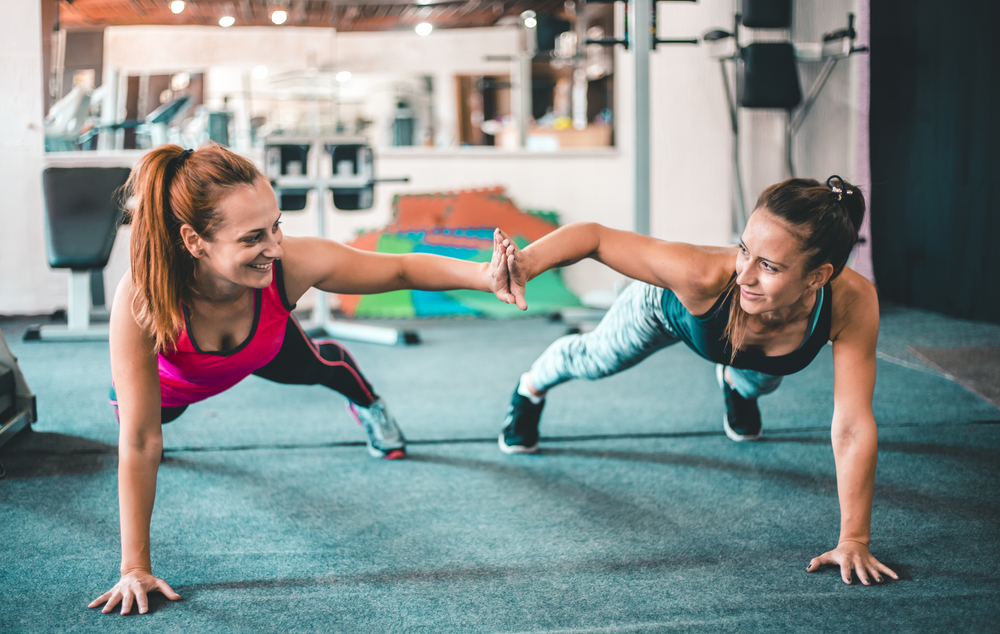 The hardest part of working out is just going to the gym—and then doing it the next day, and the next… Once you’re there you usually have a good time and you always feel better about yourself when it’s over. In a lot of ways, it’s just like going on a vacation. Nobody wants to plan it, but once you’re hanging poolside with a piña colada in your hand, you tell yourself you should go on vaca more. Before you do, though, you’ll probably want to get vaca bod, which means you’ll have to go to the gym. The good news, is we’ve learned a few tricks to make sure you don’t hit snooze instead of continuing a regular workout and we’re going to tell you about it.

The number one secret is that working out with friends will motivate you to keep working out. Studies show that we’re all jealous enough of each other that if your friend starts working out, you’re going to run faster and work out more than you would have if she just stayed at home. Apparently this only works for women if your friend is a woman, because hearing about guys working on their lats and biceps or whatever does nothing for us, sorry. Did you hear that, every single guy on Bumble?

It’s hard enough getting a friend to show up to brunch on time, so how are you going to convince a friend to work out with you? Actually, Barry’s Bootcamp is running a promotion called Friends With Benefits now, where you can get two classes for the price of one. We’re telling you because we’re such a good friend. Unless you’re living under a rock or like, Bushwick, you know what Barry’s Bootcamp is. It’s only one of the betchiest fitness classes/cults you can take and it’s all over the world in the cities with hottest people. Literally, there’s a Barry’s in Dubai and Oslo, which we can only imagine are both full of models.

If you want to look like one of those models, we suggest you bring your second hottest friend with you to sign up for class before the promotion ends on 10/31. The promotion is called Friends with Benefits, which is true because you’ll both save money and look hotter and skinnier by the end of it. All you have to do is get your friend to sign up for a class in advance, and then show up with her and you’ll both get your next class on Barry’s.

Another way to stick to your workout is to post about it on social media. I know it sounds too good to be true, but then again, Beyoncé exists so some things that seem impossibly good are actually real. Studies also show that seeing your friends post about their workouts on social media actually motivates you to work out more. Seriously, runners ended up running more on average when they saw their friends posting their runs. So if you want your friends to keep you on your fitness game, take a few selfies at Barry’s and let them know your abs are getting ready for vacation.

Plus, another benefit of bringing your friend is that you’ll already be hanging out together, which means both of you will be late to brunch, but at least you’ll both be late together.

If you want to work out with us, The Betches, sign up for our Betches With Benefits Class at Barry’s Park Ave South. Get your shit together on Sunday, October 22nd at 12:45pm. The first 50 people who RSVP to [email protected] will get to work out with us!