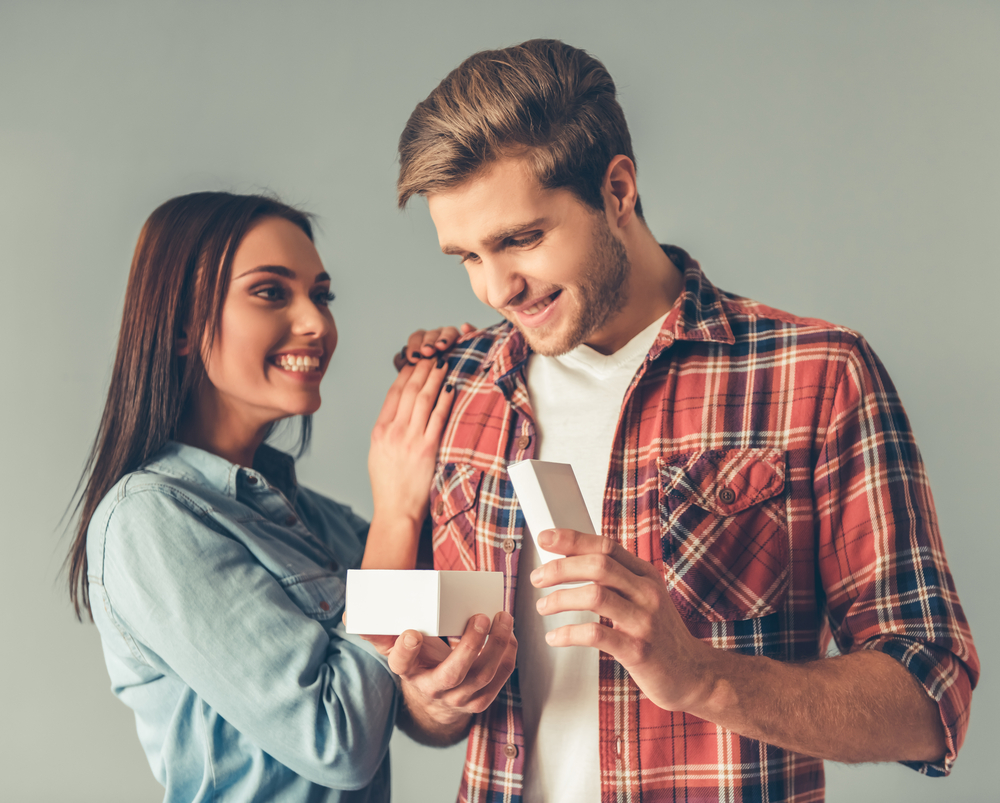 With the holidays approaching, there are fewer thoughts more romantic than those of what material goods you’ll purchase for the person you’re fucking. And yes, because we (for the time being) live in a society where we at least pay lip service to the idea of women being on equal ground with men, you have to buy your boyfriend some shit for Christmas or Hanukkah or whatever holiday he celebrates.

But what do you get him? For that, you look to the duration of your relationship. While it’s fair enough to say that more dating = more money, you should also consider the seriousness of your offering. Use this handy guide for some ideas, with the knowledge that, as always, if you disagree with me, you are wrong.

You’ve Been Together: Less Than One Month

A one-way ticket to Mexico: Everyone who jokes about moving emigrating now that Trump’s president always mentions Canada as a destination, despite Mexico being cheaper and warmer. Why? Because they’re fucking racist, probably. Instead, take advantage of your intense budding romance and run away together. Start over. You could do a lot worse than drinking beers on the beach until one of you decides to kill the other for the insurance money.

BirchBox Men: You really don’t want to spend too much money here, seeing as how you’ve only been official for a month. But it’s only $20 for the first month (you can just cancel it for him as soon as you order it if you don’t want to pay for more), and it’ll help him be less disgusting so maybe you’ll keep him around longer.

Tile Mate: If there’s one thing I know to be true of my gender, it’s that we lose shit CONSTANTLY—not least of all because it’s so much easier to whine “honeyyyyy, have you seen my keys?” But you’re probably not on a pet name level yet, and you certainly don’t live with him. Allow this to be your stand-in. It’s a little gadget that attaches to whatever he wants, so when he loses it, his phone can help him find it. 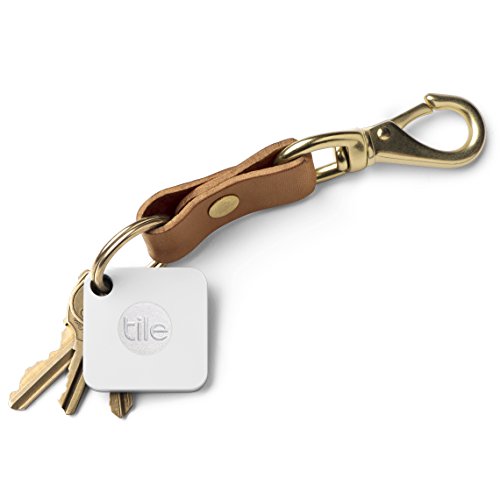 Whiskey Stones: Even though there won’t be a President Hillary around to personally cut off all our balls and literally end men as a gender (there really are people who thought this), most men are still fucking sheep and look to fictional characters like Ron Swanson for guidance in “how to be a man.” To that end, these whiskey stones are the perfect analog for modern manhood: superficially authentic, but ineffectual (they will not actually keep his drink cold). As a bonus, if he’s a little too excited by these, you know you’re dealing with one of “those” guys. You’ll find a fedora somewhere in his closet. 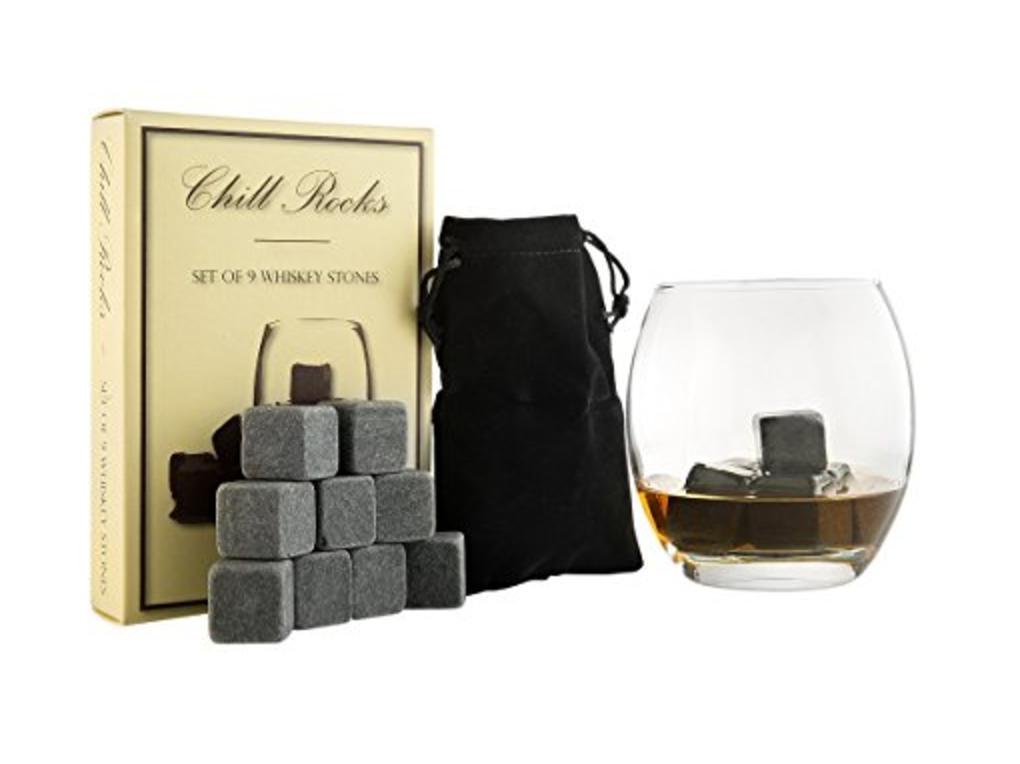 You’ve Been Together: 1-6 Months

Birth Control: Not for him, obviously, but for you (for him). You’ve been going for a while now, so I think it’s safe to say you’ve got a good thing going. Let him raw-dog it, for fuck’s sake. It’ll be better for you too, you know. Condoms are the devil, even if they do protect against most STDs.

An EDC Kit: Short for “everyday carry,” these kits aren’t unlike the whiskey stones in that they’re a largely useless prop of performative masculinity—”real men are always prepared,” etc. They are handy, though, especially if that nancyboy you’re dating’s hands are too soft to open a pop top like a man. $100 says he uses the phone dongle more than anything else, but not having a screwdriver when you need one is really fucking annoying. 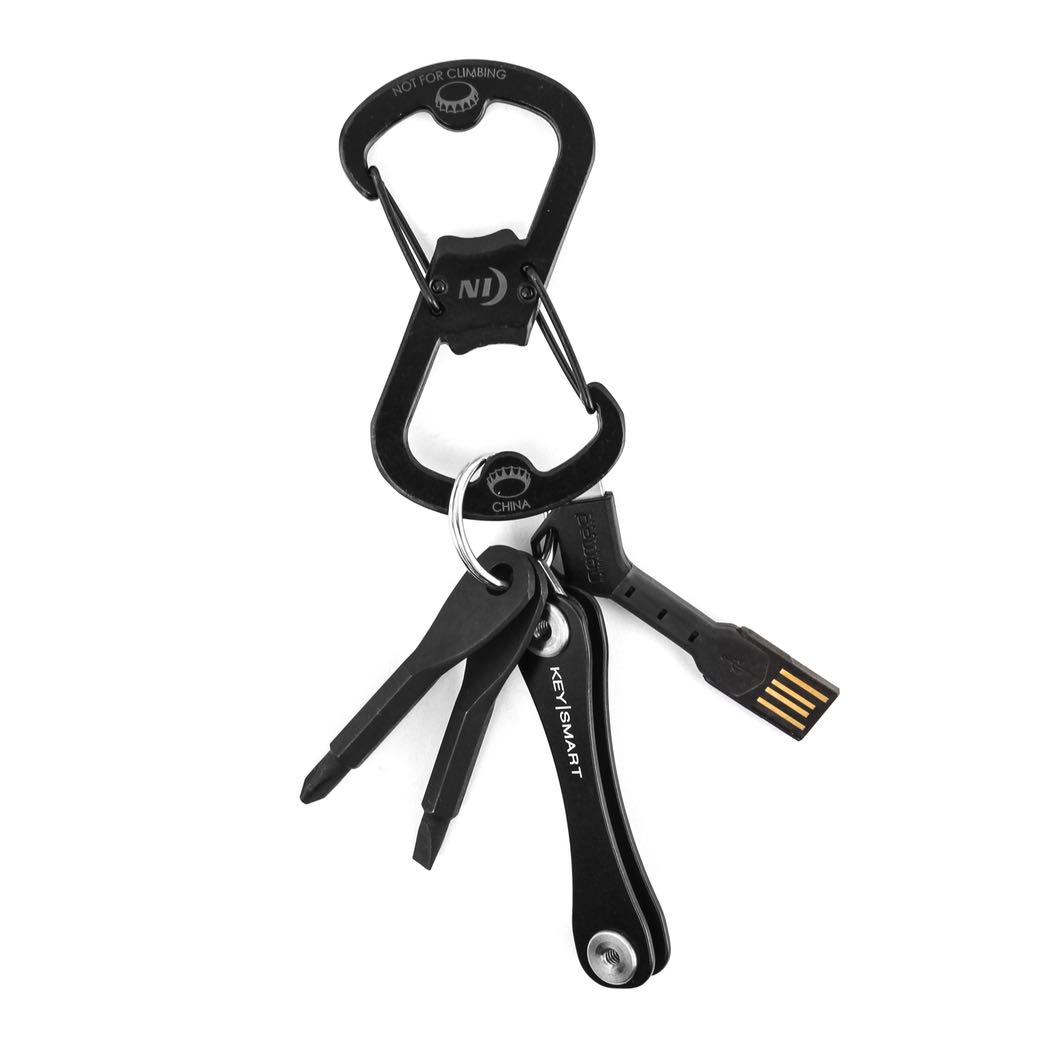 Some Decent Cologne: I can’t begin to tell you which kind exactly, because everyone’s different and everyone likes different smells. But something in the $50-$100 range will do, so that at least he’ll stop wearing that goddamned Polo Blue like it’s still 2004. I say that if he wants you to touch his dick, you get some say in what it smells like.

Some Nice Wine: The best gifts are the ones that are really for yourself, and you’ll both need something to get you drunk once he admits to himself that he doesn’t like scotch whiskey. Winc has a pretty cool concierge service going, making this a little more sentimental than just going to Trader Joe’s and buying something a step above the two-buck Chuck. What’s that, you drank the whole bottle before I got home from work? Haha, classic you! *looks up local AA locations*

You’ve Been Together: 6 Months To 1 Year

The Philips Norelco OneBlade Electric Shaver: If, unlike me, your boyfriend can grow a beard, you probably hate it. Beards are overdone and gross. But stubble is still sexy, and the reviews indicate that this thing is perfect for maintaining varying degrees of 5:00 shadow. As a plus, you can probably use it to trim your vaj, too.

Trunk Club: There’s no nicer way to tell someone they dress like a fucking slob than to provide them with a viable alternative. Trunk Club uses personal stylists to send your man curated clothing and accessories each month, which he can accept or reject. It looks like the stylists are mostly young, cute women, so he’ll probably be really into it. He’ll look better, and you can use the time to nurse your crippling insecurity—a win-win!

Bose SoundLink Mini II: You probably don’t throw big, raging parties all that often, but it’s still nice to be able to listen to music without waking up the whole apartment building. The Bose speaker has incredible quality and battery life, and it gets as loud as you’d reasonably want something to. Plus, whenever you have a Bose appliance, people will ooh and ahh over it like it’s a fucking original Andy Warhol painting. A misguided sense of status and achievement is the greatest gift you can give, IMO. 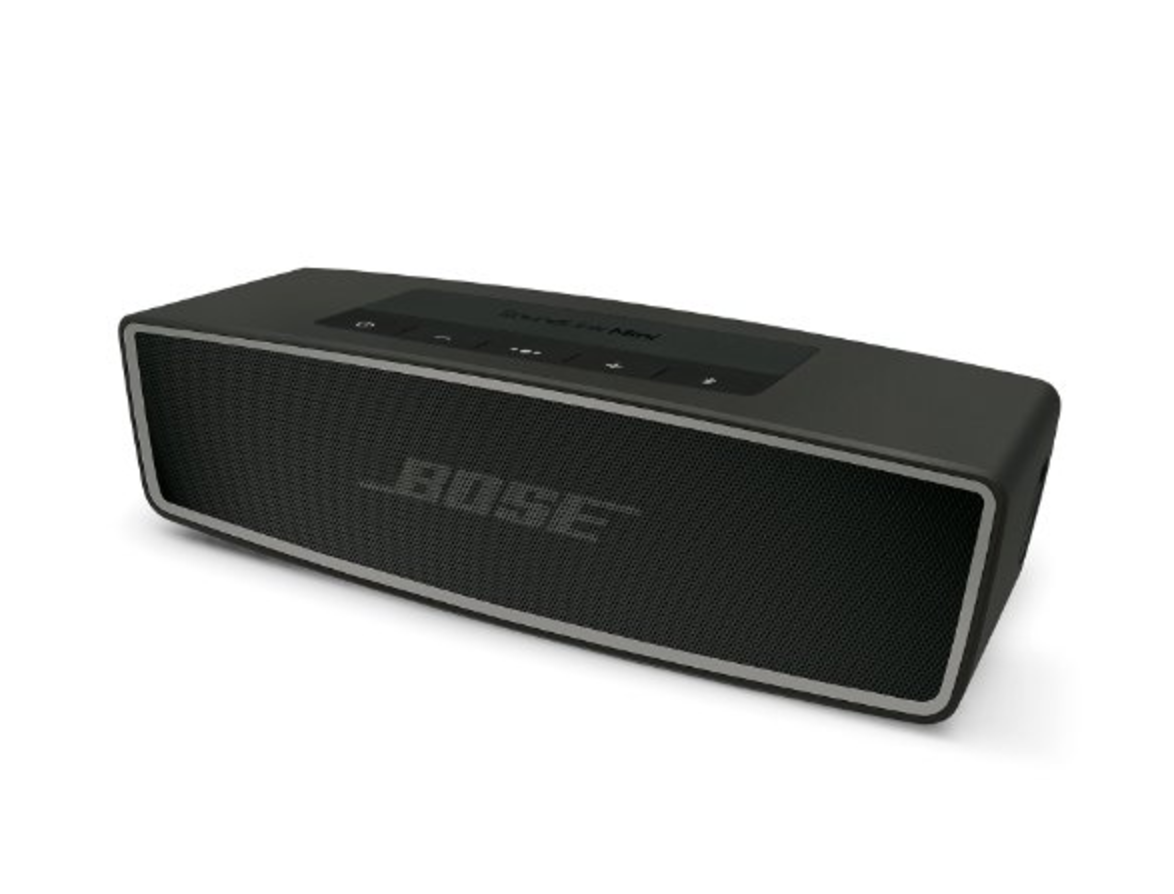 You’ve Been Together: More Than 1 Year

Some New Sex Stuff: Look, even “Party In The USA” gets old if it’s the only song you ever listen to. No one’s saying you need to buy a sex swing, just change it up a little bit. Break out a vibe and do some diddling while he watches. Have you 69-ed in a while? It’s fun (until it hurts)! Post some anonymous n00dz to r/gonewild and have some hot sex to the thought of a bunch of Reddit nerds fapping and diddling themselves to your naked splendor. Anything to convince him that his best days aren’t behind him, really.

A Real Fucking Watch: It doesn’t have to be this one, but you could do a lot worse than the Vincero Chrono S. Horology is one of those things that a small subset of very annoying people get way too into (hence the term horology), but you don’t need to go hunting for a vintage Patek Philippe that costs more than your literal worth as a human being. Anything sleek, classic, and vaguely expensive looking will suffice. 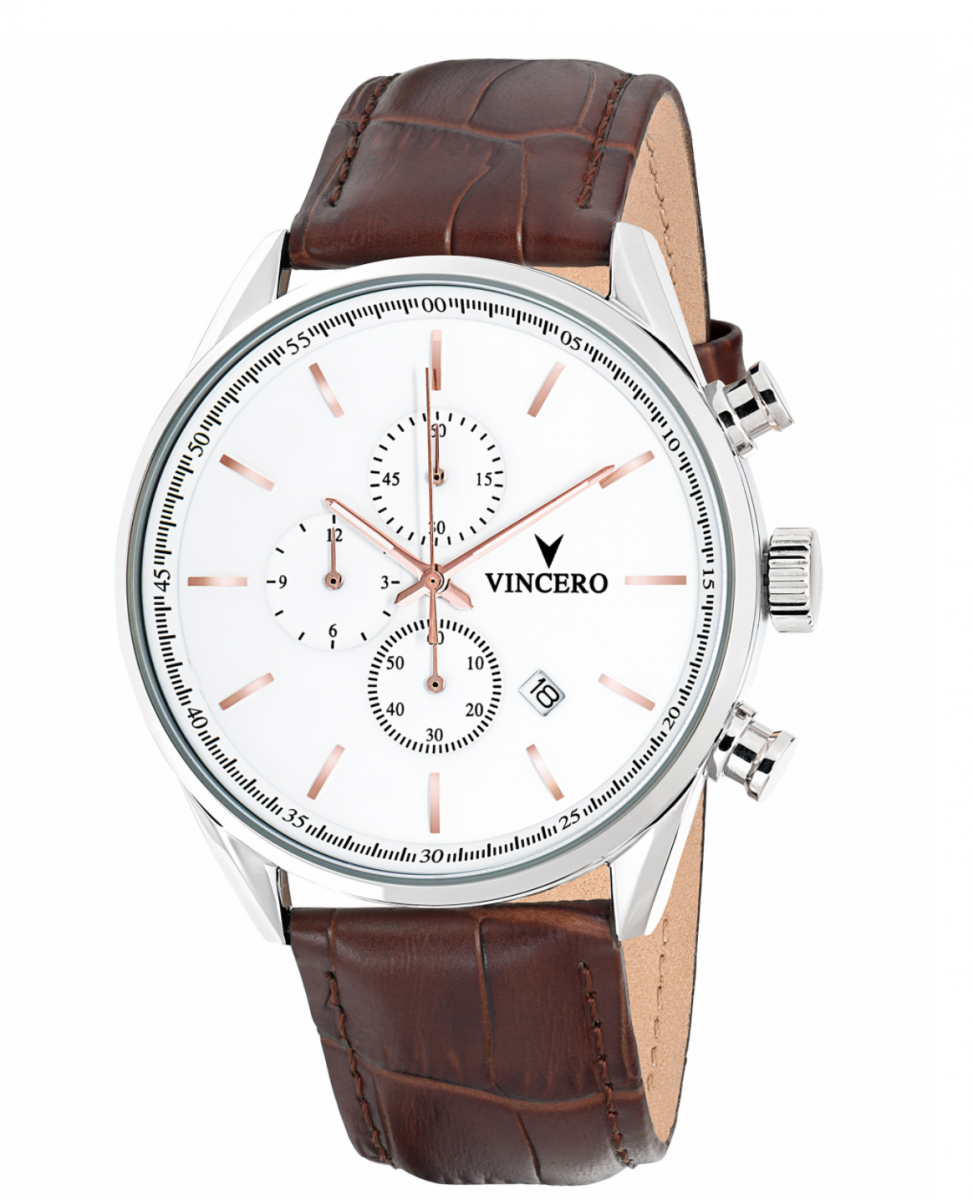 ClassPass: Group fitness is such a legitimate phenomenon that gone are the days when ClassPass was only good for barre and spin classes. The trouble with most workouts is that you get bored of the routine, and this is obviously the opposite of that. The other option is for your fat fuck boyfriend to become a CrossFitter, and I promise you don’t want that. 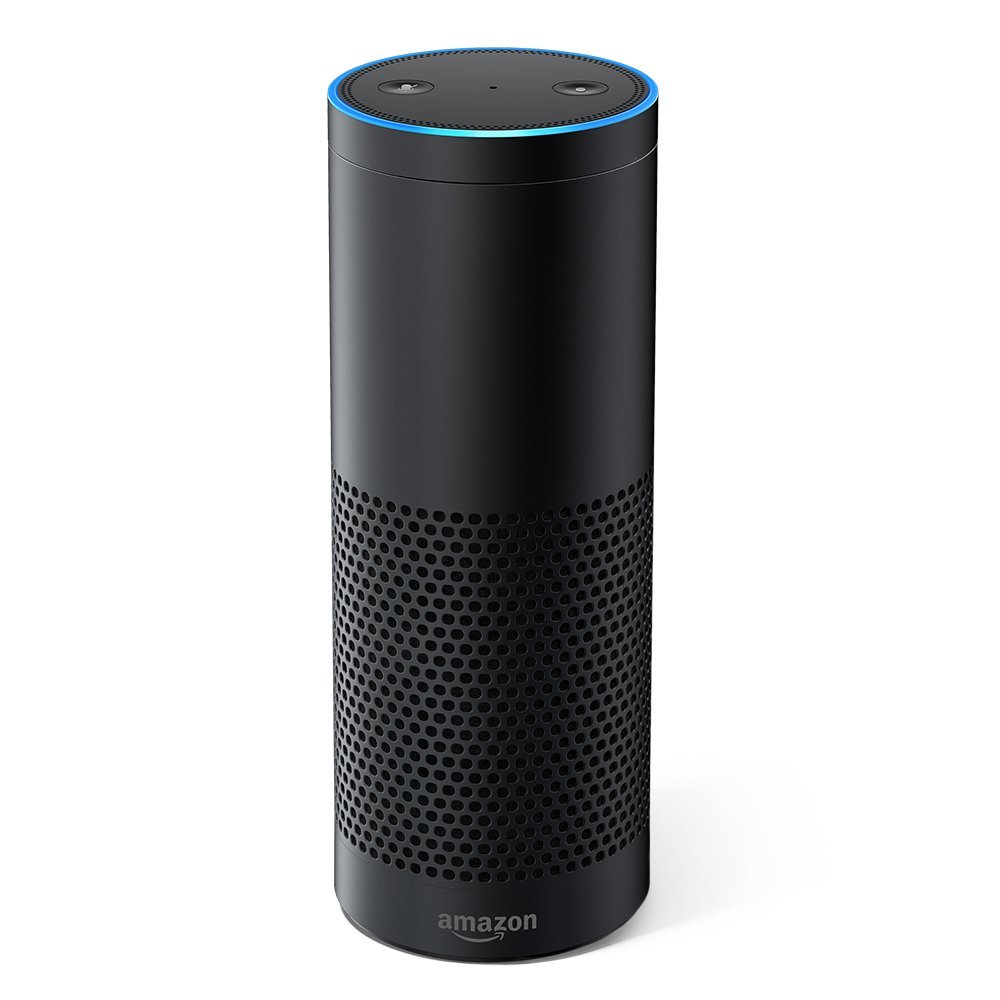