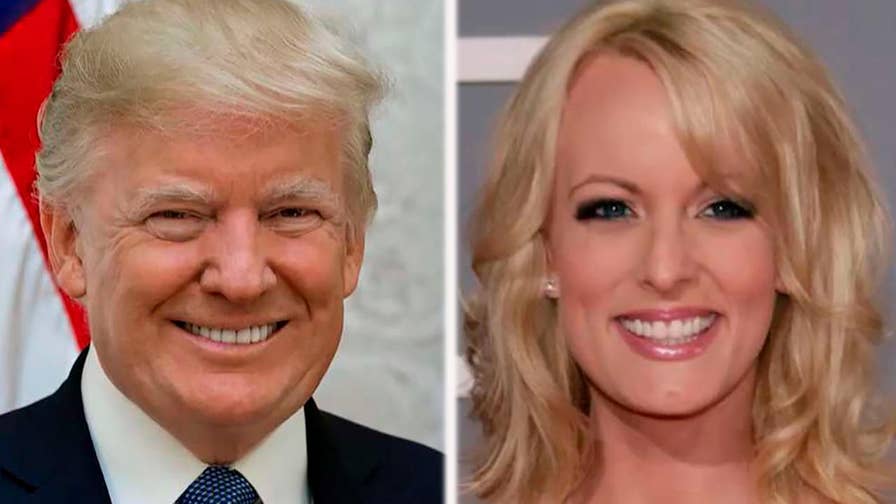 Adult film star Stormy Daniels claimed she agreed to keep quiet about her alleged affair with President Trump after she received a chilling threat in a parking lot and worried that her infant daughter would be harmed, according to a “60 Minutes” interview that aired Sunday.

Daniels, whose real name is Stephanie Clifford, said she was threatened by a man who approached her in Las Vegas after she sold her story about her alleged 2006 sexual encounter with Trump during the American Celebrity Golf Tournament in Lake Tahoe.

“I was in a parking lot going to a fitness class with my infant daughter and a guy walked up on me and said to me, ‘Leave Trump alone. Forget the story,’” she said. “And he leaned round and looked at my daughter and said, ‘That’s a beautiful little girl. It would be a shame if something happened to her mom.’”

Not long after the magazine story was killed, Stormy Daniels says she was threatened by a man who approached her in Las Vegas. “A guy walked up on me and said to me, ‘leave Trump alone. Forget the story.’” pic.twitter.com/JMskKQiYCi

She added, “I was concerned for my family and their safety.”

Trump has strongly denied the claims.

InTouch magazine initially bought her story for $15,000 but opted to kill it after Trump’s personal lawyer, Michael Cohen, threatened to sue the publication.

In the CBS News interview, Daniels claimed the tryst with Trump took place one night during the three-round golf competition at the Edgewood Tahoe golf resort in July. If true, Trump would have been married a little more than a year to Melania. Their son, Barron, would have been four months old.

Daniels said her interaction with the president of the United States started after he showed her a picture of himself on the cover of a magazine. After a flirtatious exchange, she told him someone should “spank” him with that magazine. And then she said she did.

“He turned around and pulled his pants down a little — you know, had underwear on and stuff, and I just gave him a couple swats,” she claimed. “From that moment on, he was a completely different person.”

Daniels claimed Trump told her she reminded him of his daughter. Daniels also said when she broached the topic of Trump’s marriage, he brushed it aside.

“He was like, ‘wow, you are special. You remind me of my daughter.’” –Stormy Daniels says of her conversation with Mr. Trump the night they met. pic.twitter.com/Mj52gSoDbH

“He said, ‘Oh yeah, yeah, you know, don’t worry about that. We don’t even – we have separate rooms and stuff,’” Daniels told host Anderson Cooper, in an interview that was taped more than two weeks ago.

She claimed she and Trump had dinner in his hotel room followed by unprotected sex. Daniels, then 27, said she was not attracted to Trump who was 33 years older than she was at the time. She also claimed that Trump offered to get her on his NBC show “The Apprentice.”

The relationship between Daniels and Trump was not contained to a single evening. She claimed that they stayed in touch and that he invited her to a Trump Vodka launch party in California as well as to Trump Tower in Manhattan.

“This was not a secret,” she said, adding that when Trump called her she would often put him on speakerphone so others could hear the conversation.

About a year after their first meeting, Trump allegedly summoned her to his bungalow at the Beverly Hills Hotel in Los Angeles to discuss a possible appearance on “Celebrity Apprentice.” When she arrived, she claimed he was watching “Shark Week.”

“He made me sit and watch an entire documentary about shark attacks,” she said, adding that he allegedly wanted to have sex again but she said no.

Daniels said Trump called her about a month later and told her she did not get the TV gig.

Last week, records were released that showed Daniels passed a 2011 polygraph test in which she claimed she had unprotected sex with Trump in 2006. The news came on the heels of former Playboy model Karen McDougal suing to be released from a 2016 agreement requiring her to keep quiet about an alleged dalliance with Trump with similar details.

There had been some concern Daniel’s credibility might be in question if she said she spent the night with Trump when he was seen somewhere else – or with someone else – at the tournament.

While Trump returned Sunday from his Mar-a-Lago resort to the White House, the first lady opted to stay in Florida with their son on a pre-scheduled spring break, the White House said.