Panel of 16 experts says that when the Nobel prize-winning poet died in 1973, there was no indication of the cancer that was supposed to have killed him 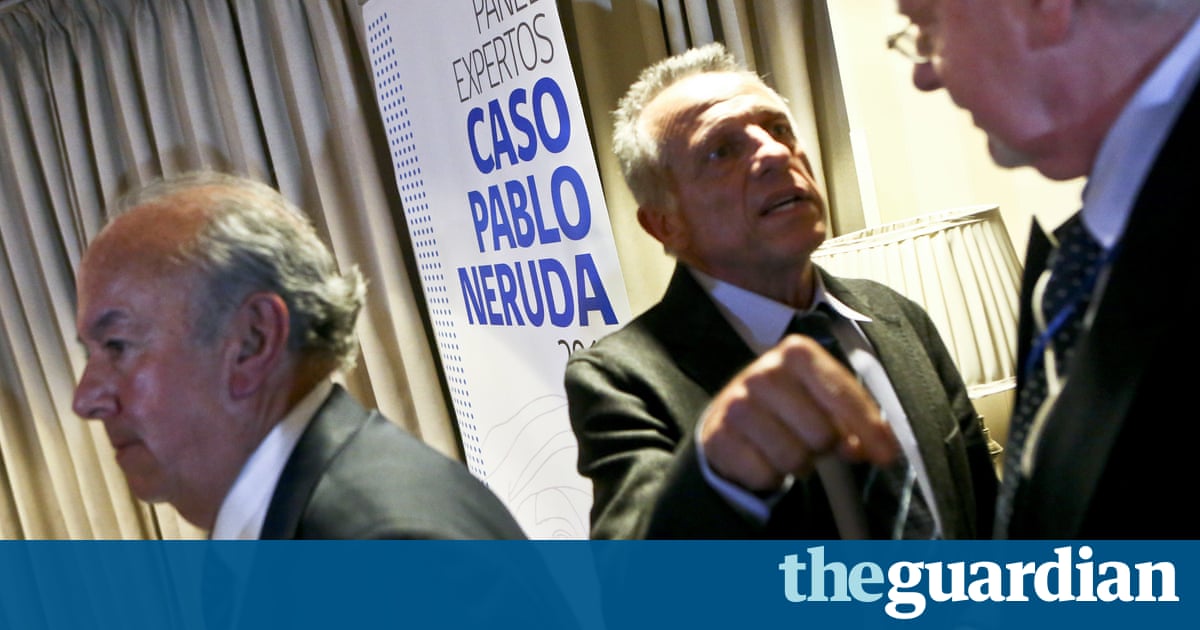 A team of international scientists say they are 100% convinced that Chiles celebrated Nobel prize-winning poet Pablo Neruda did not die from prostate cancer, his official cause of death.

Neruda died aged 69 at the Santa Mara Clinic in Santiago, on 23 September 1973 12 days after Augusto Pinochets military coup toppled the democratically elected government of President Salvador Allende. In 2013, Chilean judge Mario Carroza ordered the exhumation of Nerudas remains after his chauffeur, Manuel Araya, told the Mexican magazine Proceso that the poet had called him in desperation from the hospital to say that he had been injected in the stomach while he was asleep.

Samples of Nerudas remains were sent to forensic genetics laboratories in four countries for analysis and in 2015 the Chilean government said that it was highly probable that a third party was responsible for his death. Neruda was reburied at his Pacific coast home at Isla Negra last year, but the tests on the samples continued.

On Friday, 16 scientists unanimously rejected the cause of death noted on Nerudas death certificate, cancer cachexia, which involves significant weight loss. That cannot be correct, said Dr Niels Morling of the University of Copenhagens department of forensic medicine, who took part in the analysis. There was no indication of cachexia. He was an obese man at the time of death. All other circumstances in his last phase of life pointed to some kind of infection.

Another of the experts, Aurelio Luna from the University of Murcia in Spain, told journalists that the team were fully convinced that the death certificate does not reflect the reality of the death. He added that the team had discovered something that could be laboratory cultivated bacteria. These bacteria will be analysed, with the results expected within a year. According to the scientists, the bacteria could have seeped into Nerudas remains from the burial site or been derived from the decomposition process.

Debi Poinar, of McMaster University in Ontario, Canada, said: We cant confirm how the bacteria got there. We have to be very careful because there are a lot of bacteria that have their origin in the soil and some of those bacteria are the most pathogenic. We have some indications that its old bacteria, not a modern or laboratory contaminant.

There are conflicting eyewitness reports about how ill Neruda was in hospital in the last days of his life. Some visitors reported that he was virtually comatose, while other claim he was dictating his memoirs to his secretary, Homero Arce.

The day before the poets death, the then Mexican ambassador to Chile, Gonzalo Martnez Corbal, visited the poet in hospital and told him there was a plane waiting on the runway at Santiago airport to fly him to safety in Mexico, where he would receive the best available treatment for his cancer. Neruda hesitated, saying he would prefer to wait two days, but died the next day. Proponents of the poisoning hypothesis maintain that, as a prominent communist, Neruda would have been an influential voice of opposition to the military junta from exile and that he was murdered to prevent him from leaving Chile.

Nerudas surviving family members are divided on the theory. One nephew, Rodolfo Reyes, is convinced that the poet was poisoned, while another nephew, Bernardo Reyes, condemns the claims as sensationalist.

In 2009, six men were arrested in connection with the 1982 death of the former president of Chile, Eduardo Frei Montalva. He had stayed in the same room in the same hospital. Frei Montalva had expressed opposition to the military dictatorship. The official cause of his death was septic shock after a routine hernia operation, but the six suspects were accused of involvement in his murder with low doses of thallium and mustard gas. The case was initially thrown out, but the same six men were rearrested in August this year.