The weight-loss company’s shares rose as much as 22 percent to $54.47 on Tuesday after it boosted its profit forecast. The gain would put the stock’s year-to-date surge at about 375 percent.

Weight Watchers also continued its streak of adding subscribers, another sign that its technology investments and marketing campaign are paying off. Key to the effort is board member Oprah Winfrey, who acquired a stake in the business two years ago and agreed to become the face of the program.

With the latest upswing, Winfrey’s holdings in the company have now generated almost $300 million in potential profit for the media mogul.

“It’s strong growth,” Chief Executive Officer Mindy Grossman said in an interview. “The team has done a really good job focusing on the quality of the numbers.”

Winfrey will once again appear in ads during the pivotal winter season, Grossman said. 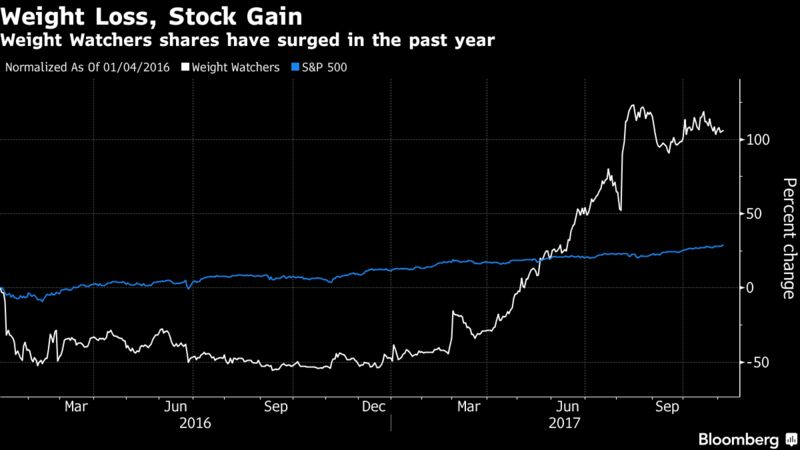 For the third quarter, earnings amounted to 65 cents a share, beating the 51-cent estimate. Weight Watchers now expects full-year profit of as much as $1.83, up from a previous high-end forecast of $1.67.

Grossman, 60, took over at the company in July after years of running the shopping network HSN Inc. She inherited a business that was on the rebound after years of stock declines and customer losses.

Winfrey, 63, acquired a 10 percent stake in Weight Watchers in 2015 and agreed to pitch the brand. She also received options that would bring her holdings to almost 15 percent. Her involvement with the company helped spur a short-lived rally that fizzed in 2016. But the shares have come roaring back in 2017. 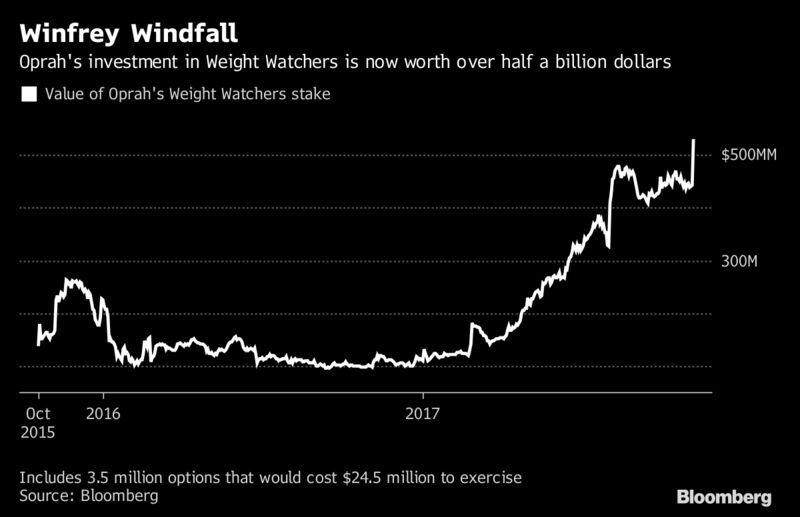 When she acquired her 10 percent stake, the stock was trading below $7. She purchased the holding for about $43.2 million. That stake was now worth about $334 million on Tuesday, bringing her a potential windfall of roughly $290 million.

Including the options, her full investment is now worth more than $500 million.

An updated diet program and a better digital platform have contributed to the company’s growth. Weight Watchers also has revamped its meetings, which long served as a key part of the five-decade-old system.

“We are confident our business momentum will continue throughout the balance of the year,” Chief Financial Officer Nick Hotchkin said.