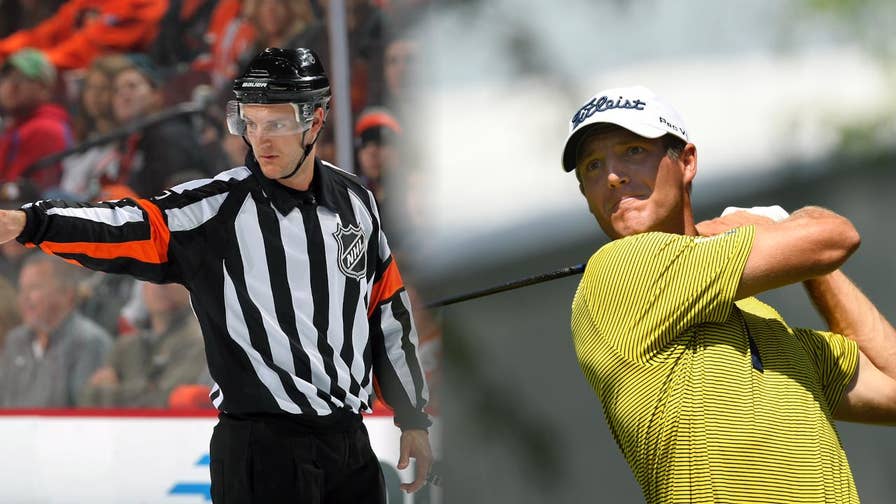 Garrett Rank is a full-time NHL referee who has qualified for his first U.S. Open. FOX News gets the full story on how qualified and how the persistent, multi-sport athlete, overcame his battle with cancer.

NHL hockey referee, cancer-survivor, and 2018 U.S. Open qualifier – all are accomplishments that could define a life or career. But for 30-year-old Garrett Rank, it’s just the beginning.

Rank’s journey to qualifying for the 118th U.S. Open at Shinnecock Hills has been anything but traditional. Rank was raised in Elmira, Ontario, and tells FOX News that hockey was his first love because “as a Canadian, hockey’s our No. 1 passion.”

“We’re pretty much born with a pair of skates on our feet,” he added.

Garrett Rank, 30, first began playing golf as a means to hang out with his older brother Kyle, who will be his caddy at Shinnecock Hills this week  (Benjamin Nazario)

So how did golf fit into the picture? First, the golf schedule worked well for Rank during hockey’s off-season.

Second, golf served as a means for Rank to hang out with his older brother, Kyle.

“I followed my older brother to the golf course when we were 10 years old,” Rank said. “He’s five years older than I am, and he didn’t really want his younger brother hanging out with him, so I managed to carve my path in golf.”

That is not the case in 2018, as the older brother will be caddying for Rank during the U.S. Open at Shinnecock.

Both golf and hockey served as potential career trajectories for the talented athlete. But that all changed when he was diagnosed with testicular cancer at 22. Rank lost a lot of weight during chemotherapy and stopped playing hockey competitively.

“Nobody’s body checking you out here on the golf course so the weight loss didn’t really matter,” he said.

Cancer did not keep Rank away from hockey, and it actually led him to become a referee and kept him involved in both sports.

“I was on the Canadian National Team for golf for three seasons while reffing in the OHL, which is the Major Junior League back home,” Rank explains. “I just said to myself, ‘whatever happens first, is what I’m going to go and roll with.’”

The NHL Official’s Association came along and offered Rank a contract as a referee.

One would think a full-time job would get in the way of golf, but that is not the case for Rank. A full-time job as a NFL referee improved his game by removing the financial pressures from each round of golf.

“There’s really no pressure from golf anymore. I know that I have a job,” Rank reveals to FOX News. “I know that I’m getting a paycheck every couple of weeks, so now golf is a little more fun, and playing at the U.S. Open is the pinnacle of my golf career.”

To see Garrett Rank give his impression of Happy Gilmore, the Adam Sandler movie about a rejected hockey player who becomes a golf star, and to learn what he’s most excited about in competing in the 118th U.S. Open at Shinnecock Hills, watch the full interview above.