In one Twitter message, Eichner – a voice actor in “The Lion King” movie and a former host of the comedy show “Billy on the Street” — suggested Ross was “enabling racism and mass murder” by supporting Trump.

At least one Dolphins player, receiver Kenny Stills, has commented publicly against Ross hosting the fundraiser. But in a statement Wednesday, Ross defended his right to do so.

“I have always been an active participant in the democratic process,” Ross said in a statement, according to Bloomberg. “I have known Donald Trump for 40 years, and while we agree on some issues, we strongly disagree on many others and I have never been bashful about expressing my opinions.”

“I have always been an active participant in the democratic process. I have known Donald Trump for 40 years, and while we agree on some issues, we strongly disagree on many others and I have never been bashful about expressing my opinions.”

Ross added that he wanted to help support Trump’s reelection campaign because he likes to “engage directly and support the things I deeply care about.”

The critics argued that Ross’s decision to back Trump was in conflict with many of the causes he claims to support, such as racial equality and LGBTQ rights. They pointed out that the Equinox brand has advertised itself as being LGBTQ-friendly.

“Hey @Equinox – what’s your policy for canceling memberships once a member finds out your owner is enabling racism and mass murder?” Eichner, who is openly gay, wrote on Twitter.

He added in a separate message: “Never thought I’d have to ask this but … Do Nazis own Crunch?”

Stills said Ross’s support for Trump was in conflict with the mission of the Ross Initiative for Sports Equality, the billionaire’s effort to fight racial discrimination through athletics.

“You can’t have a non profit with this mission statement then open your doors to Trump,” Stills wrote on Twitter.

Teigen posted a series of messages criticizing Equinox and SoulCycle.

“Everyone who cancels their equinox and soul cycle memberships, meet me at the library,” she wrote in one message. “Bring weights.”

In another, she wrote: “Oh and f— soulcycle but I thought that way before this anyway.”

Even former CBS anchorman Dan Rather commented on the controversy.

“So Stephen Ross, the owner of SoulCycle, the Miami Dolphins and Equinox Fitness is hosting a big fundraiser for Trump,” Rather wrote. Many of his customers aren’t happy. People can’t vote out the president at the ballot box until next November. Will they vote with their pocketbooks sooner?”

“We believe in diversity, inclusion and equality,” Whelan wrote on Twitter. “Mr. Ross is a passive investor and is not involved in the management of SoulCycle.” 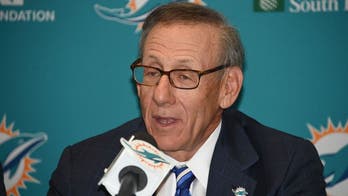