Research shows the impact of unhappy marriages on health. Sometimes its better to walk away than to stay, says relationships writer and broadcaster Nichi Hodgson 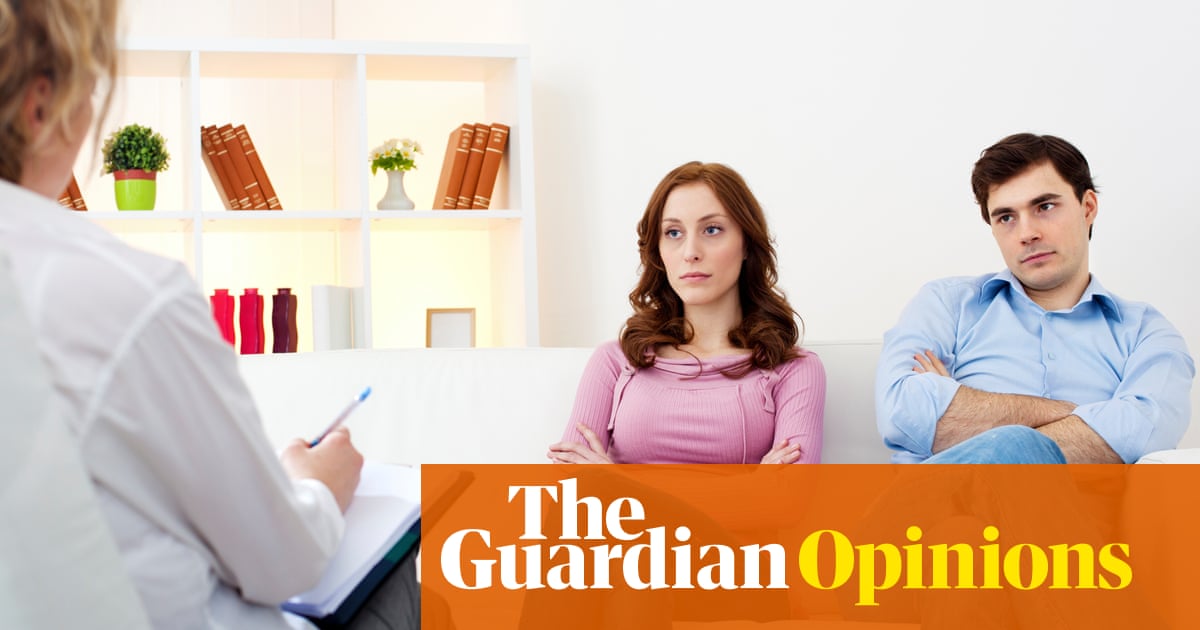 Mend it, dont end it has long been the conservative mantra governing many a struggling marriage. But now, the research weve long needed to shoot a cupids arrow through the stultifying notion that any marriage is better than none is here.

A long-term study of 373 married couples conducted by the universities of Nevada and Michigan has confirmed what the emotionally astute among us have always suspected: that constant strife does not lead to a happy life and that sisyphean arguments about core issues such as children, money, in-laws and leisure activities all negatively activate the release of stress hormones, cause inflammation in the body and changes in appetite regulation, and compromise the functioning of the immune system.

Of course, this doesnt immediately overturn a body of evidence that suggests marriage can have demonstrable benefits for both straight and LGBT couples alike as Rosie Shrout, who presented the evidence at the International Association for Relationship Research conference, has herself said. But marriages benefits arent automatically conferred on couples by the mere act of walking up the aisle its what spouses do for each other throughout the marriage that counts.

For decades, research showing that most marriage was better than no marriage particularly for men has been heavily promoted by rightwing campaign groups such as Marriage Foundation. They have argued that keeping a ring on it contributes to better economic health and personal welfare, and that unmarried couples with children one fifth of parent/child households are responsible for more than half of all family breakdowns, which brings its own social malaise.

But their mend it, dont end it mantra has rarely offered the appropriately detailed strategy needed to keep a long-term relationship going, especially when it comes to managing attachment styles, conflict over core values, issues around fertility and sex, and the ultimate passion-killer, money or the lack of it. Instead facts such as children are more likely to have a smartphone than a father and that children especially boys need father figures, or only 9% of couples who break up have a high-conflict relationship ie arguing a lot have formed the bedrock of their high-minded advice.

Its time to overhaul this Victorian allegiance to marriage at whatever the cost. Its a known fact among therapists that couples that are conflict-avoidant are just as likely as, if not more likely than, those that regularly fight to face relationship difficulties. In the case of abuse, neglect or serial infidelity, it seems many people dont walk away soon enough. According to the Office of National Statistics, one woman in four experiences domestic abuse in her lifetime and in England and Wales two women are killed each week by a current or former partner, while women in their 60s are only around half as likely to seek a divorce as men because of financial worries, even when they are deeply unhappy.

From a personal perspective, as a child witness to several parental divorces, Ive always found deeply patronising the notion that people walk away too soon from failing relationships and damage their kids in the process. Trust me, I was never happier than when my parents were out of their multiple acrimonious marriages. And far from putting me off, if anything its made me more determined to have a good go myself. Its also made me acutely aware that a marriage at whatever cost is simply not worth it and that life after a bad marriage can be brilliant.

Having written a book on the history of relationships that charts how rights for women and LGBT individuals, and greater emotional literacy, have improved this once patriarchal institution, I appreciate that its true that some failed relationships could, and can, be fixed with professional help, funds permitting. But calling time on a relationship where boundaries are being regularly transgressed or where one party simply isnt in love with the other would be, in the eyes of many a therapist, a successful negotiation out of the amorous contract. We dont need to keep people married any more than we need to keep them in work they hate and its vitally liberating to both public health and personal freedom that we let people divorce at will.

Far from worrying about the marriage crisis, we should welcome scientific evidence that a bad marriage can be as physically damaging as too much drinking or chronic work stress, and take the opportunity to really re-evaluate what we mean by relationship health. Strong personal boundaries, clear, honest communication, and a union in which both parties feel able to be heard and respected for their differences form the bedrock of the kind of relationship that helps people and society thrive. Whatever the legal status of your partnership, its time for us to let go of the notion that mend it, dont end it must prevail. Prepare Yourself For The Royal Wedding! The Top Fashion Picks To Watch Prince Harry & Meghan Markle Say ‘I Do’ In!