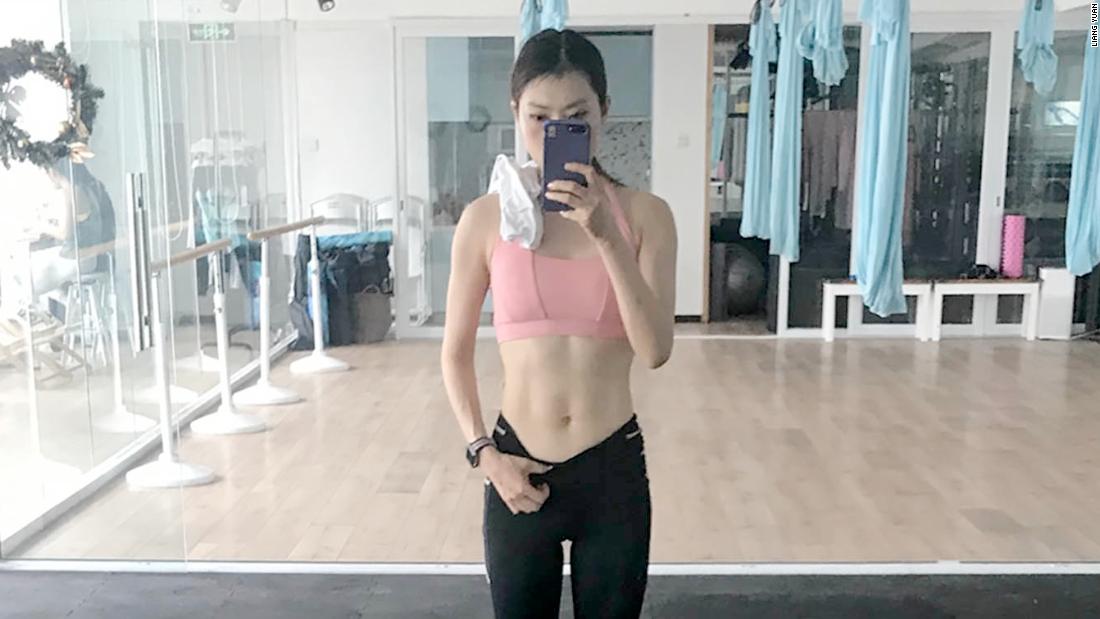 With prices ranging from 1,000 RMB to 19,000 RMB (US $156 to $2,974) a year, salespeople are ready to explain the advantages of their gym’s membership card over the competition.
Exercise isn’t traditionally part of Chinese culture, barring some aunties square-dancing in the park and a few tai chi practitioners on the sidelines. But that’s changing now, with the hashtag #MajiaXian going viral on Weibo, China’s Twitter.
Because the outline of well-toned abdominal muscles looks like a vest, Chinese call abs “majia” — or “vest” — and “xian” — or “lines,” and this year they have become the goal of many women’s pre-summer workouts.
Related terms such as “MajiaXian VS Fat Tiger,” “Follow Victoria Secret Models to have Majia Xian” or “If you don’t lose weight in May, only sadness will be left in June” rank high on Weibo’s list of trending topics They have been trending since Chinese New Year, when people make resolutions, and will continue to do so through summer until late fall — when people wear less clothing.
Traditionally, a more willowy physique has been considered to be ideal for Chinese women — as represented in literature, art, families and education — and gyms were not a common part of everyday life. But increasing exposure to Western lifestyles has made a desire for a more muscular physique, namely abdominal muscles, trendy.

‘I want to have majia xian, and I will have it one day’

After seeing people around her with six-packs, fashion designer Liang Yuan started to work out with the goal of well-defined abs. She bought a gym membership as a birthday gift for herself. Friends and family members have started to call her a “fitness monster” because she goes to the gym twice a day, seven days in a row.
“I want to challenge myself,” she added.
Liang skips most social outings so she can hunker down in a nearby fitness studio after work. Over the next two hours, she works up a sweat via a mix of high-intensity interval training, boxing, aerial yoga and sometimes dancing.
On Liang’s WeChat, the most popular social media app in China, she documents her journey toward majia xian. 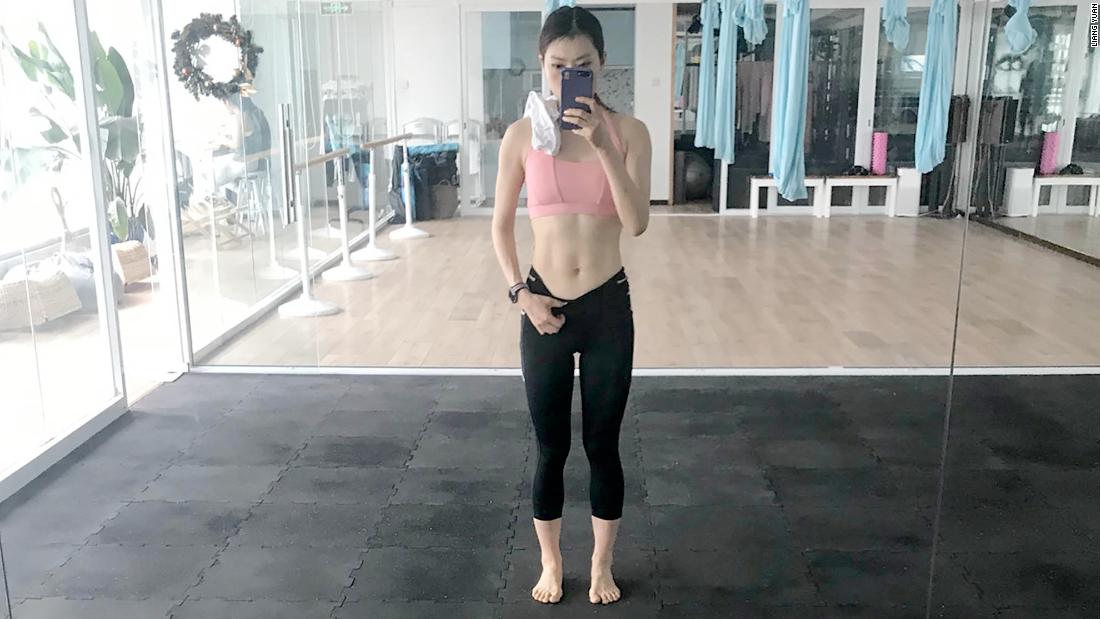 “This is not just a beginning; this is a way to look back,” she wrote, summarizing her achievements in 2017. “I have done something I didn’t even dare to dream in the past, and now I achieved something I thought I was unable to do.” She had developed a six-pack.
The goal of defined abs is shared by hundreds of thousands of young Chinese women like Liu Zhichang, a 25-year-old operator in a marketing team of a tech company in Beijing, drawing them to gyms. Workout posts on WeChat have spread among her friends like a “virus,” she said, adding that every woman wants to have majia xian, especially when they see their friends’ toned abs.
“At the beginning, I secretly admired them,” she said. She dedicated herself to working out, making it a habit. She said to herself, “I want to have majia xian, and I will have it one day.”

Women in China have long associated being beautiful with being skinny, but a desire to be thin is often taken to the extreme, with detrimental effect on health and self-esteem — a situation not unique to China.
Hou Shiyao, CEO of a new women-only gym called Fit 4 Life in Beijing, said that most of the women who come to her studio aim to lose weight from the start. “They want to be like a skeleton or a piece of paper.”
Many fads attest to this obsession.
The A4 social media challenge in 2017 featured women posting pictures of themselves covering their waists with an A4 sheet of paper (21 centimeters by 29.7 centimeters, or 8 inches by 11 inches). Another had women posting pictures of themselves wrapping their hands around their waists to show off their slender physiques.
The Weibo hashtag “I have waist of A4 size” has been viewed more than 210 million times. 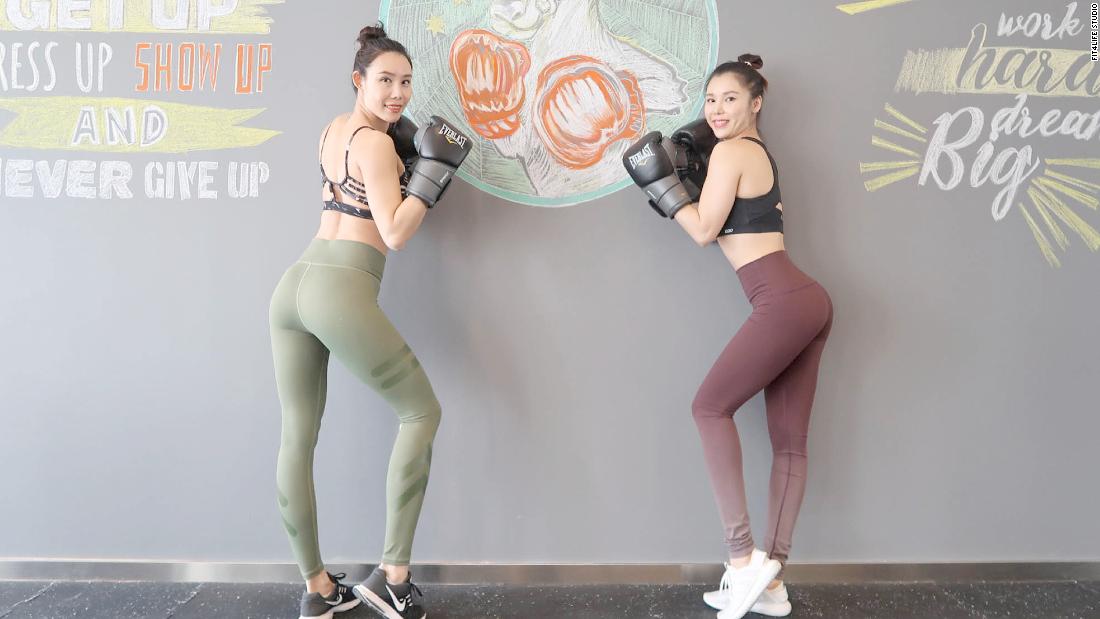 Absorbing a steady diet of internet celebrities’ photos, many girls dream of sharing their favorite star’s body shape despite the fact that everyone is born with a different one.

‘Eventually, you will accept who you are’

But for some women today, going to the gym has changed their goals, as they discover that body shape can be changed somewhat by gaining muscle without losing weight.
Shi Wen, who attended her first fitness class two years ago with the aim of being thin, is now a part-time trainer. Now, she says that being skinny doesn’t matter; she’s fine the way she is.
Many workout-obsessed women are increasingly realizing that no matter how hard they try, they won’t be supermodels, and acknowledging that physiques can vary due to a number of factors. This is an important step on their path to self-acceptance. For many, the aim of losing weight has transformed into the desire to be the best version of themselves.

“Eventually, you will accept who you are and live peacefully with your disadvantages,” Hou said.
Liu doesn’t weigh herself as often as she used to. Instead, she pays more attention to the changes in her body. But majia xian is still her ultimate goal.
“I hope I can wear a crop top this summer!” she said.