China’s top smartphone makers are ready to challenge Apple Inc. on its home turf after trouncing the iPhone maker in their own market.

Huawei Technologies Co. and Xiaomi Corp. are in talks with U.S. wireless operators about selling flagship smartphones to American consumers as soon as next year, according to people familiar with the matter. The handset makers are negotiating with carriers including AT&T Inc. and Verizon Communications Inc., said the people, asking not to be identified because the matter is private. Talks are still fluid and it’s possible no agreements will materialize, they said.

Apple has a lot at stake in the U.S., where it is the leading smartphone maker. In years past, it’s been insulated from competition by strong support from carriers, which used to subsidize its expensive iPhones and lowered the upfront price for customers. These subsidies or discounts have gone away, as carriers moved to phone financing that spreads costs over two years. 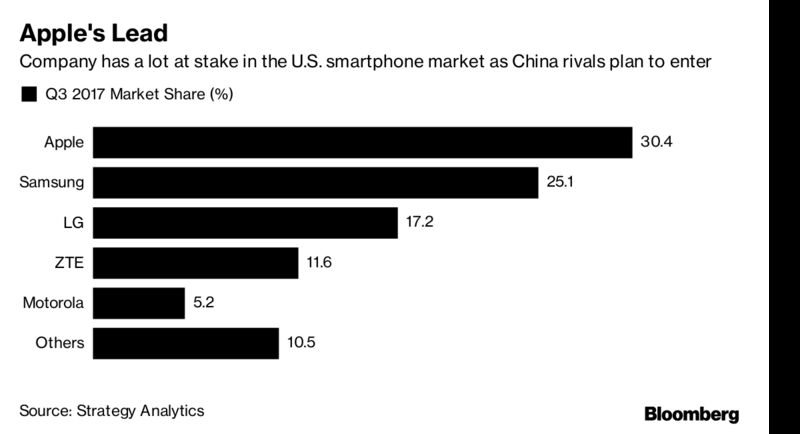 Huawei has already tried selling its flagship Mate 9 phone in the U.S. via e-commerce websites like Amazon.com, but working directly with wireless partners would give China’s No. 1 phone maker a wider presence across the U.S. through retail stores, carrier websites and TV commercials. Huawei is in talks to sell a flagship line via U.S. carriers, but the Chinese company also plans to sell the Mate 10 device through e-commerce channels, the people said.

Xiaomi executive Wang Xiang said the firm aims to roll out phones in the U.S. within two years, but noted that the process of working through specifications with each carrier is time consuming. Xiaomi is also weighing opening retail stores in the U.S. to build its brand and sell its fitness trackers, thermostats and vacuum cleaners before a phone launch, he said. Those products are already sold online in the U.S. Verizon, AT&T and Huawei declined to comment.

The Chinese handset makers are targeting the U.S. market at an opportune time. U.S. carriers are cutting subsidies so consumers increasingly pay full price, in some cases more than $1,000, for high-end phones. Chinese rivals often sell phones far cheaper. Huawei’s Mate 9 was on sale on Amazon.com for $400 on Thursday.

The U.S. phone market is dominated by Apple and Samsung Electronics Co. Since most phones are purchased through carriers, it’s nearly impossible for a manufacturer to gain serious market share without support from AT&T or Verizon, the two largest U.S. wireless networks.

The telecom companies have supported challengers. Verizon sells Google Pixel phones, and Sprint offers Andy Rubin’s Essential handset exclusively. ZTE Corp., another Chinese phone maker and thus far one of the most successful in the U.S., sells its dual-screen Axon model in the U.S. via a deal with AT&T.

Apple considers China one of its most important markets, yet sales have fallen there in recent years. Apple shipped 8.8 million iPhones in the third quarter in China, ranking behind Huawei, Oppo, Vivo, and Xiaomi, IDC estimated last month. That gives Apple just under 8 percent of the Chinese smartphone market, compared with just over 33 percent for Huawei and Xiaomi combined, according to IDC’s report. 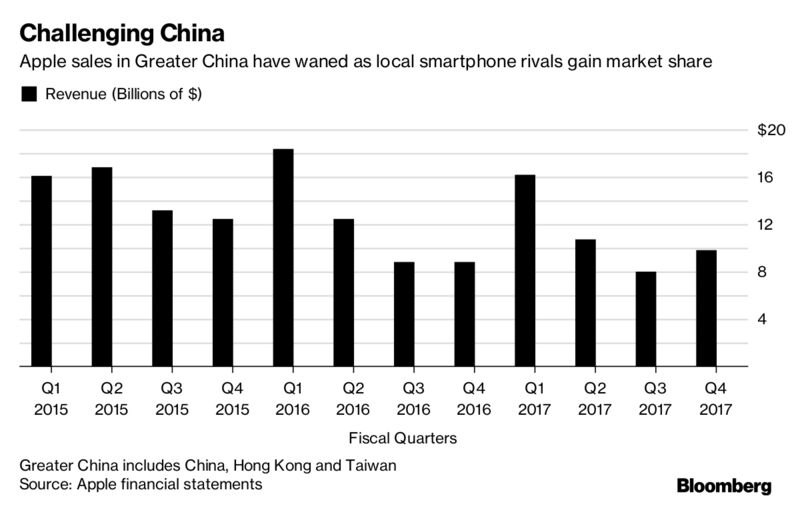 Still, that represents some improvement. Apple saw six successive quarters of iPhone sales declines in China before the third quarter, when it had a 40 percent year-over-year increase, according to research firm Canalys.

Tim Cook, Apple’s chief executive officer, spoke at China’s World Internet Conference in Wuzhen this month for the first time, emphasizing the importance of the market.

Still, some analysts are skeptical that Apple’s rebound can last. Though it introduced its 10th-anniversary iPhone X recently, the $1,000 device costs a lot more than most rivals.

“Apple’s growth this quarter is only temporary,” said Mo Jia, an analyst with researcher Canalys, said. “The hefty price of iPhone X is going to hurt sales in China.”