Being obscenely rich and famous gets boring after a while. There’s only so much champagne to drink, cocaine to snort, and butts to do stuff to. Eventually a celebrity might grow jaded with the good life and want to branch out and try new things. Sometimes they really shouldn’t …

In 2016, Turkish President Recep Erdogan — best known for dismissing the rule of law and firing or imprisoning thousands of government employees for being “insufficiently loyal” — apparently decided that what would really help his domestic image was a famous human accessory. Enter Lindsay Lohan. That year, Lohan visited refugees in Turkish refugee camps and hospitals. It’s perfectly normal for celebrities to take in a day at the poverty zoo, but the visit took a strange turn when she spoke to the Turkish media, praising Erdogan in the kind of tone usually reserved for big-time producers. She claimed that the Turkish people really admired and respected Erdogan, and he handled the 2016 coup attempt very successfully. It was the best coup. Huge!

It gets weirder. In interviews, Lohan started to repeat a favorite political slogan of Erdogan’s — “The world is bigger than five,” a call to enlarge the UN Security Council beyond five members, presumably with Turkey being the sixth. In a photo op with Erdogan and his wife, Lohan even handed them badges which read “The world is bigger than five” in Turkish. Nobody knows the reason for Lohan’s passion, but we can only suspect cocaine was involved. 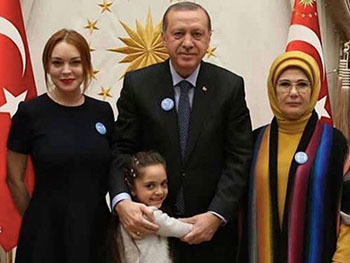 Lohan further praised Turkey for its treatment of women. That’s a pretty mind-blowing statement, because Erdogan’s party worked hard to reduce penalties for rape, made it harder for women to divorce men, and lowered alimony payments. Erdogan also called women who work outside the house “half-persons” and claimed none of them were equal to men. That makes sense, though; Lohan hasn’t worked outside of the house since 2006.

Brian McKnight is best known for his ’90s “treat her like a gentleman” anthem “Back At One,” which details how he will woo his lady by repeatedly assuring her she is the only one for him, then generously demonstrating his ability to count to four. But now he’s tired of the respectful act and wants to make the baby-making implications a little more explicit. Very explicit. His latest tunes are firmly X-rated.

“If You’re Ready To Learn (How Your Pussy Works)” started it all. No one seemed to know whether it was a joke. On the one hand, it came complete with an official video produced by Funny or Die. On the other, McKnight seemed awfully serious about it, complaining about people complaining, and even offering to release a clean version. But there was one industry that unabashedly loved the track: pornography. Always ready to capitalize on our confused boners, they flooded McKnight with licensing and performance offers.

Matthew Perry And Jennifer Aniston Made A Windows 95 Tutorial

Unless Ken Griffey Jr. roller blades into your backyard with an Ecto Cooler and a No Fear T-shirt, you’ll likely never see something more ’90s than Jennifer Aniston and Matthew Perry teaching you about Windows 95. It would be one thing if it was just Chandler Bing slowly walking you through the “all-new ‘find’ feature” like you’re that idiot Joey, but it’s much weirder than that. It’s actually an entire “cyber sitcom” about the two of them trying to find Bill Gates so they can audition for the video guide to Windows 95. Spoiler(?): They get the job.

The video also includes a bunch of weird side characters. (Gates is not among them. Even he wouldn’t deign to be in this video for his own product.) There’s a Russian window washer who won’t stop making terrible window puns, a white guy who is supposed to be a ninja, and a video game addict who wants to play Aniston in 3D pinball. Sure, that’s why nerds in the ’90s were obsessed with Jennifer Aniston.

Why is part-time soccer player / full-time Instagram model Cristiano Ronaldo so beautiful? Is it because of his light olive skin, his naturally high cheekbones, the beauty regimen his immense wealth allows, or the fact that he’s one of the fittest men on the planet? Why no, you moron, you unbelievable trash person, how dare you? It’s because he uses the Facial Fitness Pao.

Ronaldo wants you to think that doing your best impression of blowing a fruit bat will grant you a jawline that dissolves underwear on sight. 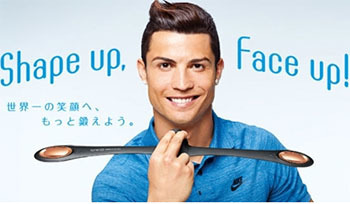 MTG
So maybe lay down a towel before starring at this photo for too long if you’re in an upholstered chair.

To his credit, he does demonstrate sincere belief in the premise, or at least a willingness to recite the sincere belief that somebody wrote for him. In one advertisement, Ronaldo is quoted saying, “In my everyday training sessions, there is one area of my body that I hadn’t been exercising: my facial muscles. That is, until I discovered PAO.” That seems like more of an emotional problem than a physical one, but whatever he’s doing, it’s clearly working. (Hint: It’s genetics. Genetics is what he’s doing.)

What’s synonymous with both glamour and sex appeal? Aging hippies, if you ask Victoria’s Secret. That’s why they made a lingerie commercial back in 2004, wherein a sultry Adriana Lima puts on a cowboy hat which a brooding Bob Dylan has thrown to the ground. It’s anybody’s guess why Dylan, a symbol of the 1960s anti-establishment spirit, agreed to star in a women’s underwear commercial. No, seriously, guess. He has never talked about his reasons for doing it.

They were going for a “lace and leather” theme, and Dylan’s briefcase-grade skin fit the latter.

Was it for publicity? Bob Dylan wasn’t exactly obscure in 2004. His 2001 album Love And Theft was called “among his very best.” Did he just want money? Why not go full throttle with an official line of Bob Dylan Blowin’ in the Wind fans and fan accessories? It could just be a joke; in 1965, Dylan said that he’d only sell out for “ladies’ undergarments.” You have to admit, it takes a hell of a lot of patience to wait 39 years to deliver a punchline.

If someone said the words “Stevie Nicks” and “hand-to-hand combat” in the same sentence, one could reasonably conclude they were having a stroke. But there is in fact a history there. In 1983, Nicks’ bodyguard, Bob Jones, told her he was working on a book about self-defense, and she jumped in with skirts a-twirlin’. When she asked what she could do to help, he suggested she model for the accompanying photos. This was clearly a joke. At this point in her career, Nicks famously refused to do photo shoots of any kind, having recently turned down a $250,000 offer which took months of negotiation. To Jones’ delight and her publicist’s deepening depression, Nicks responded “It all sounds fabulous! I’d love to!”

Nicks showed up for the shoot the only way she knows how: with her hair “done to resemble the mane of a lion,” enormous platform boots, and several dresses more than necessary. 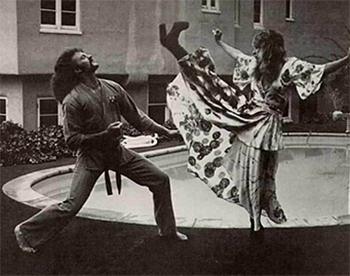 Bay Books
It’s a technique for softening blows by armoring yourself in most of a laundry hamper.

Two hours later, Jones had 100 photographs of himself and Nicks in various fighting poses, a collection he considered the “most magnificent” to “ever [be] offered to the martial arts.” It must be said that this event too almost certainly involved a lot of cocaine.

Nobody ever accused Charlton Heston of being an apolitical figure. But while he was best known for his support of gun rights and leadership of the NRA, there is another, crazier side to the story. For six years, Heston held the nation’s highest level of nuclear security clearance. Had he finally snapped and begun plotting a reenactment of the ending of Beneath The Planet Of The Apes?

Oh no, it was much weirder than that.

One day, two workers at Los Alamos were arguing about the quality of the nuclear industry’s training films — specifically, that they were boring as shit — when one of them asked: “Who in the hell do you want, Charlton Heston?” Apparently the answer was yes. That man managed to recruit Heston, and the actor began narrating all sorts of films for the government. This required granting him top-level nuclear security clearance, because it wasn’t the tax code he was talking about. But that wasn’t Heston’s only security classification. He said that he did classified work for other agencies as well, though he declined to identify them, or the projects involved.

We are going to assume they are ape-based.

He had to know we were going to assume they were ape-based, right?

Now you too can have the facial fortitude of Cristiano Ronaldo by using the same face excersiser thingy that he uses. Sports.

If you loved this article and want more like it, please support our site with a visit to our Contribution Page.

Also check out 21 Super-Unfortunate Side Projects By Famous Performers and 7 Celebrities Who Invented Amazing Things on the Side.

Subscribe to our YouTube channel, and check out The 6 Most Surreal Celebrity Endorsements, and watch other videos you won’t see on the site!