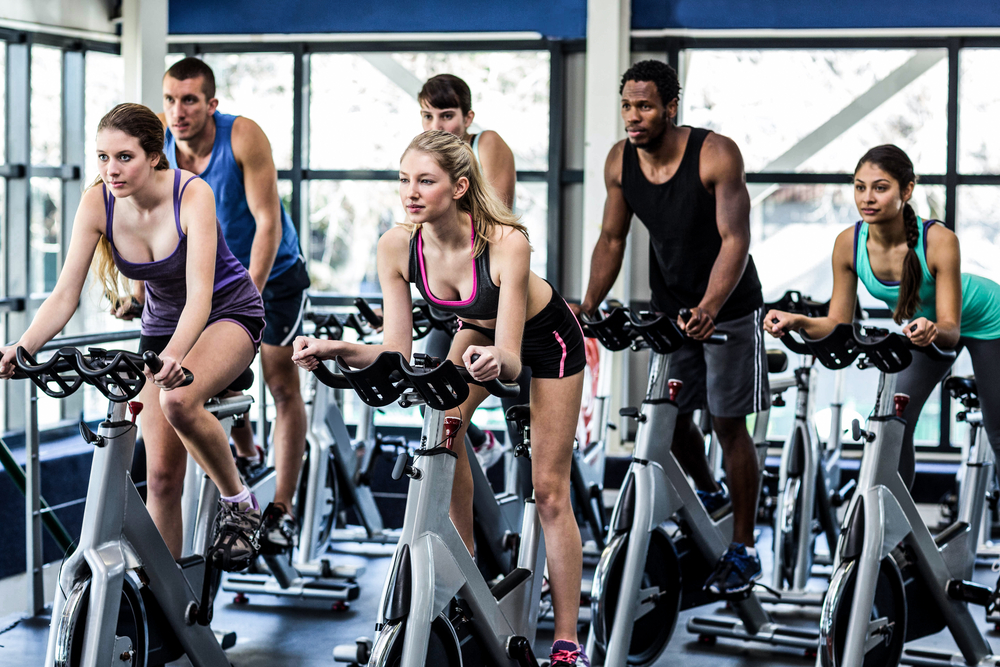 From the moment you walk into a cycling studio until the moment you leave, the whole experience is one sweaty blur. I mean, unless you’re the front row freak wearing only a sexy sports bra who arrives 15 minutes early to chat with the instructor, no one really knows what they’re doing. You get there, set your bike settings to whatever looks right, and just start peddling, immediately regretting your decision to get out of bed for this shit. While you can’t screw it up that badly, you’re probably doing a few things wrong, and you could get a much better workout if you get your shit together a bit. Here are the mistakes you’re making in spin class.

1. Bouncing Side to Side Too Much

Spinning is all about the music, so a lot of people think it’s normal to start bouncing around the bike like a fucking bobble head. Like, you could literally be biking to a 12-minute Demi Lovato trap remix and you don’t even care how awful it is because you’re here already and the only thing that can make the class better is to dance around a bit. As tempting as it is, swaying your hips from side to side could actually ruin your workout. When cycling, your abs should be engaged the entire time, so your legs are the muscles doing the work while your core is staying stabilized. When you move your hips around, you’re destabilizing your core and moving too much to get the ab workout the bike was designed for. Stop bouncing from side to side and you might start seeing a huge difference.

2. Setting Your Handlebars Too Close To You

Somebody once told me the world is gonna roll me made up a rule about measuring your elbow to your fingertip as a good benchmark for where your handlebars should be. Not only is this distance super random and ineffective, but it’s probably too close, and everyone’s bodies are different so it’s just about trial and error. Plus, our arms aren’t always in the same proportion to the rest of our bodies, so you could end up straining your lower back or leaning on your shoulders too much. Try getting on your bike first, and then seeing where your handlebars are most comfortable. You want to feel like you’re reaching outwards a bit without going over your handlebars when you’re in third position. You’re already way too close to the person’s ass right in front of your face. Don’t make this worse than it needs to be.

3. Keeping Your Seat Too Low

When you’re setting up your bike before class, you probably think you need to keep your seat lower than the handlebars, because it feels natural like riding a bike. Most people don’t realize that cycling bikes are actually built so that your quads, glutes, and hamstrings are all working at once. When you’re too low, you’re only using your quad muscles and not getting the total leg workout that you would by being up a bit higher. Put your seat on a higher level than you’d think it should be without your legs going completely straight in between peddling. It should feel like somewhere in between your childhood bicycle and an elliptical machine.

This is a mistake that a lot of people do without even realizing, but it could majorly jeopardize your workout. When you hold onto your handles super hard, you’re taking the workout away from your core and legs. It’s kind of like going on a run downhill. You’re still running the same amount of miles, but it’s obviously a million times easier because you’re not actually working your legs as much as you would on a flat road. I mean, we’re not saying you’re literally cheating if you hold onto the handlebars too tight, but you’re basically making the workout a LOT easier on yourself, so you’ll just end up burning less calories. The handlebars are really only there for support, so unless you’re about to fall off and embarrass yourself in front of the entire back row, stop holding on so tight.

Holding your breath is pretty tempting when you’re 35 minutes into the class and you literally can’t feel your legs anymore. In fact, it may even seem easier just to stop breathing completely so you can be dragged out of class early by some much-needed medics. As much as we understand your thought process, holding your breath while spinning is just a bad idea. When your body is working hard and your muscles are moving, you need your breath to give your muscles energy. When you stop breathing, you’re just making the whole process harder for yourself, and you’ll end up just getting dizzy and probably falling off the bike. Like, that’s just a waste of everyone’s time and money.

When class is finally over and the teacher invites you to stick around for two minutes of stretching, don’t be the bitch that throws your towel on the ground and sprints to the shower line. It’s literally two minutes of stretching, and your legs could use it. Skipping the stretch will just make you more sore tomorrow, and could make your legs cramp up in the middle of the night if you’re taking a PM class. By simply stretching out your quads and glutes for those few moments, you’ll help release lactic acid in your muscles and prevent yourself from being too sore to move tomorrow. I mean, you’ve come this far, so don’t bail now.