According to the very latest scientific data, you require food in order to live. But do you know what you’ve been wolfing down alongside a lifetime of Chipotle burritos, Taco Bell burritos, and questionable gas station burritos? Lies. Heaping helpings of lies, all carefully seasoned to ensure that as much of your money as possible winds up in the grease traps of greedy corporations. For example …

We Have Orange Juice With Breakfast Because One Year, California Had Too Many Oranges Lying Around

No breakfast is complete without a nice tall glass of orange juice. A single serving of this vitamin-packed wonder liquid gives your immune system the healthy kick in the ass it needs to get through the day. But don’t take our word for it. Just look at this 1922 Sunkist ad, in which 3,000 physicians opine that breast milk is a thing for savages and tiny babies who couldn’t hold down a job long enough to afford vital, life-giving orange juice. 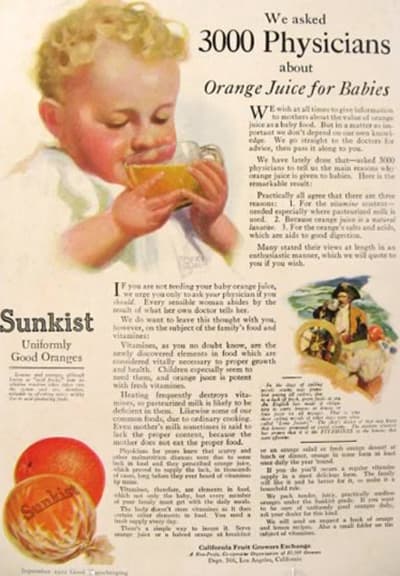 Sunkist, via Atticpaper.com“Its the brain-frying avalanche of sugar that developing bodies need.”

That ad is how the whole American orange juice craze started. In the early 20th century, drinking OJ was nearly unheard of in the U.S. That all changed in 1908, when the over-planting of orange trees in California caused a massive glut in the market. So Sunkist developed a cheap juice extractor, interviewed thousands of totally real doctors who said that orange juice was the best possible thing to give to babies, and soon everybody’s mom was shoving OJ down their kids’ gullets if they so much as sneezed. Never mind that drinking the equivalent of four oranges in a single serving is about as healthy as kicking off the morning with a Big Gulp.

While you may practically have it on intravenous drip today, chances are you never had so much as a drop of coffee before you hit adulthood. Part of that is because coffee is objectively disgusting, and kids don’t need chemical assistance to face another day of work. But it’s mostly because your parents didn’t want you consuming something so caffeinated that it could stunt your growth. 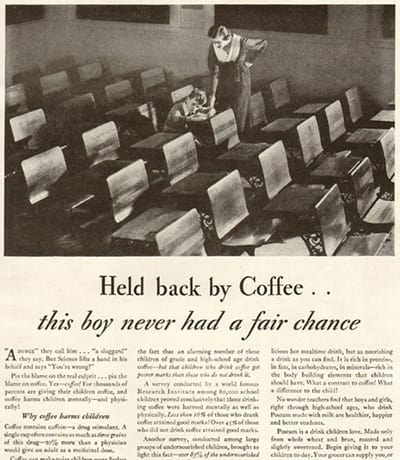 Via Smithsonian.comApparently, back in the ’30s, you were graded on height.

The thing is, there’s never been one shred of scientific evidence that drinking caffeine keeps children tiny. The whole idea was the brainchild of cereal magnate C.W. Post. Near the turn of the 20th century, he introduced Postum, a caffeine-free “coffee alternative” made from roasted wheat bran and molasses. Because as any trucker can tell you, the only important components of coffee are 1) its hotness, and 2) its brownness.

Postum sounds like something you’d use to torture trade secrets out of a Starbucks barista. Perhaps that’s why in order to sell it, Post first had to launch a massive smear campaign against coffee, doing his damnedest to convince consumers that everyone’s favorite steamy breakfast beverage was liquid Satan in a cup. The campaign was so successful that Post’s wheat-based sludge is still available to this day, finding popularity with people like Mormons — who, coincidentally, view coffee as liquid Satan in a cup.

There Was No Tradition; You Buy Chocolate On Valentine’s Day Because Of Cadbury

Among many other things, the Spanish conquistadors stole the Aztecs’ love of chocolate. Back then, chocolate was served as a foamy beverage brewed similarly to coffee, and in his 1662 book The Natural History Of Chocolate, physician Henry Stubbe concluded that it was great for “supplying the Testicles with a Balsam, or a Sap.” And now you’re going to feel really weird when handing your little nephew a steaming mug of hot cocoa this winter. 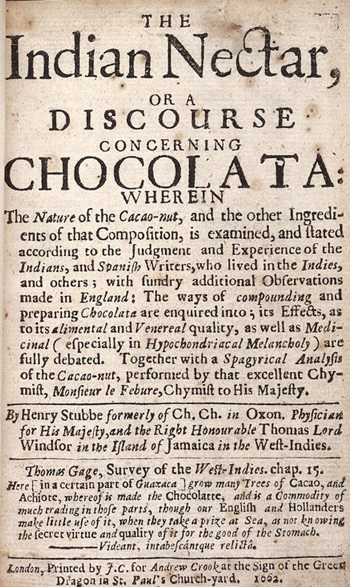 Henry StubbeMmm. Warms you right down to the nutsack.

It seems only natural, then, that hot chocolate would be paired up with the boningest of holidays. (No, not Presidents’ Day. The other one. Valentine’s Day.) It took a good two centuries from the time of its Western discovery for British chocolatier J.S. Fry & Sons to develop a version of chocolate that didn’t require a cup. It then took another decade for Richard Cadbury (of modern-day Cadbury Creme Egg fame) to arrange said solid chocolates in fancy boxes. They were an instant hit. Victorians, being huge fans of both fanciness and boxes, snatched them right up.

Fast-forward another seven years to 1868, and Cadbury finally produced the first heart-shaped box of chocolates, right in time for Valentine’s Day. Today, Americans alone buy an estimated 40 million such boxes each year. Meanwhile, allegations of chocolate’s sexual benefits are still as full of shit as they always were.

Today’s brown sugar is basically the over-refined white stuff with some molasses added back in. But did you know that sugar wasn’t always white? Back when it was shipped in its raw form to England in big-ass barrels, sugar often arrived with the molasses content having oozed toward the bottom. Rather than attempting to redistribute the molasses, it was more feasible to refine the sugar — a 32-step process that saps it not only of its brownness, but also of everything that makes it awesome. Whereas today’s sugar can be described in one simple word (i.e. “sweet”), the sugar of yesteryear boasted an array of flavors that would make a pretentious sommelier stammer.

But why did white sugar become the norm? Surprisingly, it had nothing to do with racism. It’s only because sugar giant Domino wanted it that way. Around the turn of the 20th century, Domino launched a media campaign featuring blown-up photos of the natural, harmless, but admittedly gross-looking microbes present in brown sugar. And the public, always down for a good ol’ misinformed scare, almost immediately stopped buying it. Domino then rode to the pinnacle of the market atop a literal sugar high. And ever since, the world has been a bit less sweet and a lot more white. Ain’t that always the way?

BMI is the two-digit number that medical professionals use to determine how expansive your ass is. Anything higher than 30 means you’re obese, while anything in the 25-29 range means you’re overweight. We’ll leave the validity of the BMI itself aside for now — after all, it’s nothing but a formula calculated based on your height and weight. But who set that scale? Who decided that 25 was overweight, and not, say, 26 or 27? 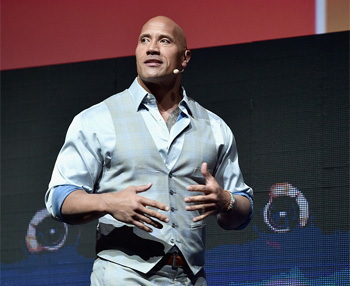 Alberto E. Rodriguez/Getty ImagesThe scale clearly has some problems when The Rock fits comfortably into obese.

That would be the World Health Organization, and by extension, its International Obesity Task Force, headed up by one Professor Philip James. In 1997, following two years of study, the IOTF lowered the “overweight” cutoff to 25 from its previous value of 27. And do you know who financially backed the IOTF’s study? Pharmaceutical companies Hoffmann-La Roche and Abbott Laboratories, producers of the weight loss drugs Xenical and Meridia, respectively. Now, for his part, James maintains that the drug companies didn’t push any sort of agenda on him (they merely pushed him lots of checks for $200,000 apiece). Still, there’s no denying that by shifting an arbitrary dot on an arbitrary scale, James expanded said companies’ markets by millions of instantly overweight people.

Of course, none of this is saying that it’s cool to burst right through the top of the body mass index like some sort of French-fry-powered rocket-person. We’re simply saying that as a general rule, anyone attempting to define a human being in two digits or fewer probably has some ill intentions.

Dr. Claudio Buttice, Pharm.D., is a former hospital pharmacist who eventually grew bored being just a doctor and became a freelance medical writer. He’s also a screenwriter and journalist who contributed to several magazines, such as The Ring of Fire, Digital Journal, Techopedia, and Business Insider — and he managed to look cool every time. If you want to offer Dr. Buttice a writing gig or just want to throw money in his general direction, feel free to contact him at tyresia2@gmail.com or on LinkedIn.

The Overworked Person’s Guide to Better Nutrition can help you by starting to sort all this craziness out.

If you loved this article and want more content like this, support our site with a visit to our Contribution Page. Or sign up for our Subscription Service for exclusive content, an ad-free experience, and more.